What does derp face mean?

A derp face is a blank, cross-eyed, slack-jawed facial expression used to characterize real people or fictional characters as stupid.

Where does derp face come from? 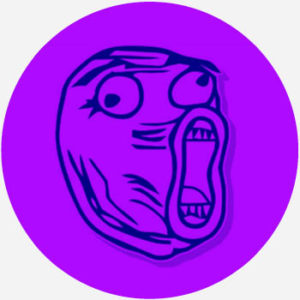 Derp begins as an interjection conveying one’s own stupidity or embarrassment, not unlike doh. Its origin is credited to the raunchy 1998 comedy BASEketball, starring South Park creators Trey Parker and Matt Stone. In one scene, the duo gets caught raiding a woman’s underwear—and sex toy—drawer, leading one to exclaim “Derp!”

Parker and Stone brought their interjection to South Park in a 2009 episode, “The Succubus,” when the character Chef has a substitute for his school-cafeteria job: an annoying Mr. Derp. At one point, Mr. Derp hits himself in the head with a hammer. With crossed eyes and a slack jaw, he mumbles the word derp in response.

Mr. Derp’s signature line and silly-looking face apparently influenced the term and meme derp face in internet culture. Following South Park, derp became a common nonsense word, similar to blah blah blah, in the internet cartoons of Rage Comics, used when characters are acting stupid or absurd. In fact, the characters themselves are now called derps, including one named Herp Derp/Harp Darp, depicted as unintelligent and with a blank, open-mouthed face.

Since at least 2011, internet users called such an unintelligent expression the derp face, both in reference to the Rage Comics character and for expressions perceived as such elsewhere in life or the web. In the world of Rage Comics, this derp face can be considered a subset of what are called rage faces or meme faces.

By 2012–13, the derp face was familiar enough in mainstream internet culture that it—along with behavior judged to be clumsy, foolish, annoying, or willfully ignorant—was being described as derpy or to derp. A scientific journal even published an article featuring derpy in its title in 2016.

Here Is The Ultimate Eli Manning Derp Face
Dom Cosentino, Deadspin (title), October, 2013
>RT My favourite pics of him are either ugly derpface or laughing his heart out. X3
@BakaLolli, March, 2018
I'm not going to lie the guy on the Resident Evil cover looks like he has a derp face going on lol
@replicantpinky, March, 2018
SEE MORE EXAMPLES

On the internet, people may post an image of a derp face in reaction to doing something they feel is stupid or commenting on something they deem so. What generally merits a derp face, however, is an everyday act of absent-mindedness or clumsiness, like spilling ketchup on one’s shirt.

Herp Derp’s derp face image is widely used in memes to a similar effect, sometimes illustrated or edited onto images of other people or fictional characters. Since the derp face meme has become widespread online, some internet users will type derp face for the same purpose—and others may even use the phrase in speech, imitating the derp face in their expression.

The derp face can also be used to troll people online, posting it repeatedly as a way to be obnoxious. In some instances, derp and derp face are used to make fun of people (or images) if they consider them dumb-looking or ugly. More offensively, it is sometimes used to mock people with physical or development disabilities, issued along the lines of the slur retard.

This is not meant to be a formal definition of derp face like most terms we define on Dictionary.com, but is rather an informal word summary that hopefully touches upon the key aspects of the meaning and usage of derp face that will help our users expand their word mastery.