or rage faces or meme faces

What does rage comics mean?

Appearing in my popular memes, rage comics are a series of cartoon faces and characters used to make jokes about everyday experiences, especially awkward or frustrating moments.

Where does rage comics come from? 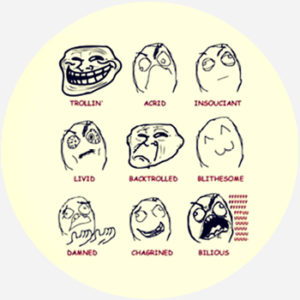 From the sobbing “Forever Alone” character to the furious “FFFFFFFUUUUUUUUUUUU” guy to the evil, blue-faced “I LIED!” figure, rage comics are short, usually four- to six- panel web comics that humorously depict everyday situations that are generally exasperating, depressing, or awkward. They took off in online message boards like 4chan and Reddit in 2008.

The protagonists of rage comics are a cast of recurring figures, usually caricatured faces. By their nature, these comics are drawn with deliberate crudeness in Microsoft Paint or a similarly basic image editor—and the humor tends to be just as crude. Though simplistic and exaggerated, many of the faces, like the “Me Gusta” face, are grotesquely hyper-detailed to play up their humor and shock value. The website Know Your Meme identifies eight major rage comic faces/characters.

The name of these rage comics comes from the fact that the very first rage comic depicted only one character, now known as either “FFFFFFFUUUUUUUUUUUU” or “Rage Guy,” who is indeed a very angry fellow. This first four-panel rage comic depicted a person using a toilet, resulting in the toilet water splashing back up, leading to the expression of rage shown by Rage Guy.

Despite their name, rage comics aren’t exclusively depictions of “rage,” as most characters express other, though still intense, emotions. Most rage comics stories focus on small, often real-life episodes, usually an awkward social interaction, blown out of cringeworthy proportion. Situations can include a trip to the DMV, getting pulled over by a cop, or telling one’s mother that you’re moving back in. The joke, in all of these comics, tends to be the reader’s ability to relate to the experience—and the rage comic character’s extreme reaction represents what we all are feeling on the inside when dealing with life’s uncomfortable and stressful moments.

Part of the success of rage comics lies in the fact that they are easy to create. There is no one person who makes them or official creator. Nor is there one consistent sense of humor in them; rage comics span a wide variety of different themes and styles, with many camps not liking the comics created by other camps. However, the intent of rage comics has never been to create something original, but rather, to use familiar experiences to generate laughs.

Though rage comics began on 4chan and can be found all over the internet, their unofficial home is on the “f7u12” section of Reddit, which stands for FFFFFFFUUUUUUUUUUUU (Seven F’s, 12 U’s), the so-called proper number of F’s and U’s to use when spelling out a particularly piqued fuck.

Rage comics are no longer as popular or ubiquitous as they were in the late 2000s and early 2010s, but they are still seen throughout mainstream culture, even used in advertisements by major corporations.

“When youre talking about the history of memes and you remember rage comics and laugh out of sheer embarrassment and mortification”
Jillian @jilliankateNOPE Twitter (April 2, 2017)
“I love how everyone is just ignoring the fact that there was a time in our lives when we thought rage comics were funny”
lalo @lillybudapest Twitter (April 12, 2017)
“Rage Comics are funny and exaggerated comics or pictures that depict everyday life situations. They're extremely popular online — especially with the younger crowd — and you can see them being used to depict nearly every relatable situation imaginable.”
Elise Moreau, “Rage Comics: Funny Internet Meme Faces,” Lifewire (October 19, 2016)
SEE MORE EXAMPLES

In addition to the many, many memes that have been generated by the rage comics there are a handful of key terms that apply. For example, male rage comic characters are generally called derps (from a slang expression of stupidity) and women are called derpettes or derpinas. Also, the French definite article “le” is typically used, with a facetious air of refinement, in the place of the English the, prefacing any word or sentence that signifies an action. For example, in rage comic culture, one would not say “the rage comics,” but “le rage comics.” Or, a weary derpina might say “Le sigh.”

Though rage comics began as paneled comics, the faces have become common enough, spread online through popular memes, for users to post a stand-alone rage face as a reaction image.

This is not meant to be a formal definition of rage comics like most terms we define on Dictionary.com, but is rather an informal word summary that hopefully touches upon the key aspects of the meaning and usage of rage comics that will help our users expand their word mastery.