What does roflcopter mean?

An internet meme from the early 2000s, roflcopter depicts a helicopter with typographical characters and is used to express laughter.

Where does roflcopter come from? 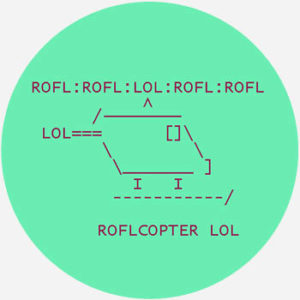 Roflcopter blends the word helicopter and the internet acronym ROFL, or rolling on the floor laughing. The term was allegedly coined in 2003 by moderators on a World of Warcraft III forum in reference to a vehicle in that online game known as the gyrocopter. According to one forum user, a blitz by gyrocopters makes one “rofl for ten straight minutes.”

The website www.roflcopter.com launched in 2004. It simply featured a GIF of a helicopter designed in ASCII, a character encoding standard used on computers. Its propellers, made of the letters ROFL and LOL, were made to look like they were spinning.

Due to the popularity of the GIF, a Flash-based game came out in 2005. Players could manipulate the roflcopter in dodging and shooting enemies in the form of WTF bombs and OMG missiles. Users also invented a way to mimic the sound of propeller blades by typing “soi soi soi soi” into text-to-speech software.

Though the original roflcopter website is now defunct, the image has remained in internet parlance and resurfaced several times since its initial appearance. This includes fan videos such as “ROFLCOPTER: The Movie”, which featured a laughing helicopter chasing people. It also inspired name of a toy store, Roflcopter Toys & Gifts, in Jersey City, NJ.

Roflcopter may refer to the meme, GIF, or Flash game. 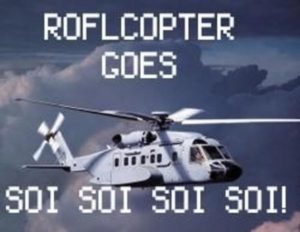 People may type (and sometimes say in colloquial speech) roflcopter as a response to something they find extremely funny in allusion to the meme and as an intensification of ROFL (e.g., Dude, roflcopter, that was hilarious!). By extension, roflcopter can also be a slang verb for “laugh hysterically.” 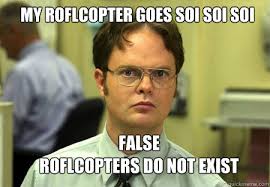 While its use has declined since its 2000s heyday, it still enjoys some contemporary currency, especially as a self-referential nod to past internet and gaming culture.

This is not meant to be a formal definition of roflcopter like most terms we define on Dictionary.com, but is rather an informal word summary that hopefully touches upon the key aspects of the meaning and usage of roflcopter that will help our users expand their word mastery.