What does Pepe the Frog mean?

Pepe the Frog is a humanoid frog cartoon character who became a popular internet meme in the early 2000s, and was notoriously appropriated by white supremacists during the 2016 US presidential election.

Where does Pepe the Frog come from? 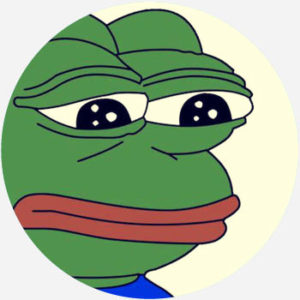 Artist Matt Furie created Pepe the Frog as an easygoing, bro-like character in his 2005 comic series, The Boy’s Club. In one comic, Pepe urinates with his pants down at his ankles. Sporting a relieved grin, Pepe says, “Feels good man.”

Pepe’s creator told The Daily Dot in April 2015 that the name Pepe (though pronounced differently) evokes pee-pee, in keeping with the literal bathroom humor the original character is known for.

According to Know Your Meme, users began creating their own Pepe images in 2008 in forums on the imageboard site 4chan. These Pepes, riffing on the frog’s signature smile, spread online as a humorous reaction, much as people post GIFs to illustrate how they feel about something. One common variant shows a smirking Pepe, often called Smug Pepe, his thumb tucked knowingly under his chin. Additionally, the variants Sad Pepe and Angry Pepe are also common.

By 2014–15, Pepe had gone full mainstream, with singers Katy Perry and Nicki Minaj notably posting Pepe memes on Twitter. But as The Daily Beast reported in May 2016, some white supremacists were disappointed by Pepe’s widespread popularity. And so, as a dark and shocking joke, they fashioned Pepes with various anti-Semitic and other racist imagery in efforts to make Pepe’s widespread use less appealing to those outside their circle. One depicts a caricatured Jewish Pepe smiling at burning Twin Towers on September 11. Another swaps out Pepe’s “Feels good man” for “Kill all Jews.”

Starting around 2015, alt-right supporters of Donald Trump embraced the bigoted Pepe memes, spreading suited-up and blonde-coiffed versions of the frog after the likeness of their candidate. While apparently unaware of Pepe’s symbolism, Donald Trump retweeted a Trump Pepe in October 2015, as did Donald Trump Jr. following Hillary Clinton’s “basket of deplorables” comment in September 2016. Many alt-right social media users have even deployed the frog emoji in their online monikers to represent Pepe and their political affiliations. Pepe has also inspired a hand gesture, resembling the OK sign, that Mediaite claims a ten-year-old flashed on a tour of the White House in March 2017.

This unassuming cartoon frog became so established as a racist symbol that the Anti-Defamation League (ADL) labeled Pepe the Frog as a hate symbol in September 2016. Around this time, the Clinton campaign released their own explainer on Pepe, commenting that the “cartoon frog is more sinister than you might realize.” Another one of Pepe’s political iterations is as Pepe Le Pen, which depicts French far-right nationalist politician Marie Le Pen as the frog.

Examples of Pepe the Frog

“Merkel: But Donald, ve had the best Nazis, the biggest rallies, a tremendous wall, what did you have? Trump: Um, Pepe the frog. #handshake”
Armchair Anarchist @narkyanarchist Twitter (March 18, 2017)
“The internet is basically encompassing some kind of mass consciousness, and Pepe, with his face, he’s got these large, expressive eyes with puffy eyelids and big rounded lips, I just think that people reinvent him in all these different ways, it’s kind of a blank slate. It’s just out of my control, what people are doing with it, and my thoughts on it, are more of amusement.”
Matt Furie, “It's Not Easy Being Meme,” The Atlantic (September 13, 2016)
“The majority of uses of Pepe the Frog have been, and continue to be, non-bigoted. However, it was inevitable that, as the meme proliferated in on-line venues such as 4chan, 8chan, and Reddit, which have many users who delight in creating racist memes and imagery, a subset of Pepe memes would come into existence that centered on racist, anti-Semitic or other bigoted themes.”
“Pepe the Frog: General Hate Symbol,” Anti-Defamation League Hate Symbols Database (September 27, 2016)
SEE MORE EXAMPLES

Who uses Pepe the Frog?

Not all uses of Pepe the Frog are bigoted. Pepe’s creator Matt Furie launched a campaign in fall 2016 to reclaim “the positive aspects” of his “cute, generally happy frog,” as he told The Atlantic. Ultimately this campaign failed in Furie’s eyes, so in May 2017, he drew Pepe in one final comic—at the frog’s own funeral, with his anthropomorphic animal friends pouring out a drink in his honor. While Furie notes many young people use Pepe innocently on social media, Pepe the Frog’s brand still remains closely associated with white supremacy today.

This is not meant to be a formal definition of Pepe the Frog like most terms we define on Dictionary.com, but is rather an informal word summary that hopefully touches upon the key aspects of the meaning and usage of Pepe the Frog that will help our users expand their word mastery.