Paul Blart Mall Cop is a both a photoshop meme and the name of the movie series that the meme is based on. It involves manipulating text from official promotional materials and making it wackier. The image of Paul Blart himself may also be subject to image manipulation.

Where does Paul Blart Mall Cop come from? 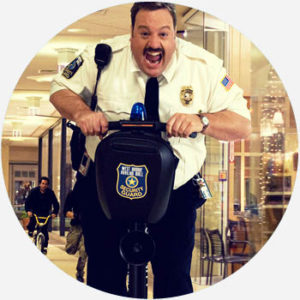 Paul Blart: Mall Cop was a 2009 movie directed by Steven Carr, and starring Kevin James. The movie wasn’t received well by critics or audiences, but that didn’t stop it from becoming prime meme material. The posters for these movies featured the ripe-for-mocking word salad of a title Paul Blart Mall Cop, along with a ridiculous shot of the titular character yelling and riding on a Segway toward the camera.

The meme itself didn’t immediately appear after the release of the first movie. In fact, the Paul Blart Mall Cop meme didn’t surface until years later in 2014. Before the first wave of memes, Tumblr user internetmoviesshrekbase posted a predecessor on May 2, 2014. This image has Shrek’s face pasted onto Paul Blart’s body. The words Shrek also appear next to the words in the movie title, producing “Paul Shrek Mall Shrek.”

While the actual original source of the meme is tough to find, it’s safe to say that the meme first made an appearance around October 25, 2014. One early version was posted on that day by Tumblr user didiwompus. The meme reads “JEEEN MAAAM / PART BLOP MOOP COOP / DOO’T MOOT WOOT HOOTMOOT!” As of 2017, the post has accrued over 68,000 notes. This one and others like it are centered around the image of Paul Blart driving his Segway toward the camera.

But the story doesn’t stop with the first movie. Paul Blart: Mall Cop 2 was released on April 17, 2015. This movie was received even worse than the first one. However, the release of this movie also spurred on a resurgence of the meme. This second wave would include the promotional posters for the second movie and another poster from the first. This poster from the first movie featured Paul Blart looking somberly into the distance in contemplation. Now that the seed had been planted with the first movie, people were ready to create some new content and the meme again exploded.

The meme may use the original materials or it could also branch off into other sources. One thing is always the same: the presence of the letters ripped from the posters. These letters are rearranged into anagrams and nonsensical phrases. The end result of this often looks a lot like a cut-and-paste note that a TV villain might send to people they want to extort. In contexts outside of the official posters, Blart’s face may appear in other settings, sometimes in crossover memes.

If someone decides to stick to the original materials, they’ll usually change letters in the title, the tagline, and even the name of the starring actor. The actual image of Paul Blart himself may also be changed via any sort of photoshop distortion.