What does Harambe mean?

Harambe was a gorilla from the Cincinnati Zoo. He was killed in 2016 to save the life of a small child who fell into his enclosure. His death variously inspired outrage and humor, especially online.

Where does Harambe come from? 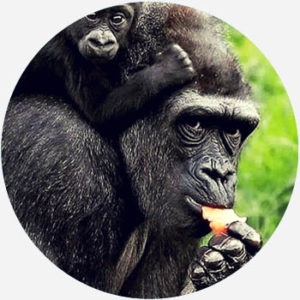 On May 28, 2016, a young boy (three- to four-years-old) fell into a gorilla enclosure at the Cincinnati Zoo. There were three gorillas in the enclosure, and the male—a 17-year-old western lowland gorilla named Harambe—took notice of the child. The 400-pound gorilla was alone with the child for ten minutes, grabbing him and dragging him around in that time. Zoo officials deemed the situation life threatening for the boy. To ensure his safety, they decided to shoot the gorilla. A bystander caught the incident on video and released it online.

Shortly after the incident, a Change.org petition called “Justice for Harambe” was uploaded. The petition called for charges to be brought against the parents, deemed negligent, though eyewitness accounts don’t suggest this. Regardless, Facebook and Twitter quickly took up #JusticeForHarambe in addition to #RIPHarambe.

Two years ago today, our brother Harambe was gunned down before his time for something out of his control. We have not forgotten and we will never forget what the Cincinnati Zoo did to my friend, my brother. #JusticeForHarambe #RIP https://t.co/1NAzfyHfQV

In response to the incident, many on the internet turned to humor. Soon, memes about Harambe were circulating on Twitter. For instance, various users included images of Harambe in tributes to other celebrities who died in 2016, including Prince, Muhammad Ali, and David Bowie. Another meme, which in part referenced the flurry of Harambe memes, internet hot takes, and the large public outcry after his death, was “I miss Harambe.”

Two people I miss the most: Obama and Harambe

One of the more popular memes began early in July 2016, when Twitter user Brandon Wardell posted a tweet reading “dicks out for Harambe”—Dicks out is a vulgar slang expression for “showing respect.” This phrase quickly gained steam, with a Reddit page and a mock Facebook event.

Why Brandon Wardell is the "Dicks Out for Harambe" voice of a generation https://t.co/GRxHRld2I8 pic.twitter.com/7TJ1DyWBY5

On August 22, the Associated Press reported that the Cincinnati Zoo was not amused by the memes and media coverage and wanted to move on from the incident.

Harambe is now officially a marijuana legend. Dabs out for Harambe.
HERB, Facebook, October 11, 2016
Jeff Atkins was the human equivalent of Harambe.. he didn't deserve to die
@Hunt5oh, April 2017 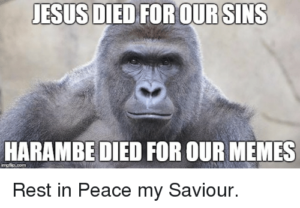 Dicks out for Harambe is one of the most popular memes that followed the gorilla’s death. It generated a snowclone “dicks out for X” which spread to entirely non-Harambe related subjects. Harambe has also gone on as a metaphor for a beloved martyr of an all-consuming media trend whose very sensationalism self-generates more attention. For example, in a February 2017 New York Times article, Farhad Manjoo called Donald Trump “the Harambe of politics, the undisputed king of all media.”

brb getting my dick out for Harambe

My dick is STILL out for Harambe 😌

Harambe-related Internet shenanigans continue. A marijuana blend called Harambe OG was released in September 2016. Faux reports that people had voted for Harambe also circulated after the 2016 American presidential election. In February 2017, a Flamin’ Hot Cheeto whose shape resembled Harambe received a winning bid of $99,900.00 on eBay, though the buyer later backed out.

This Cheeto that looks like Harambe allegedly sold for almost $100,000 https://t.co/PtpZACp8T7 pic.twitter.com/3w5VDngg3G

This is not meant to be a formal definition of Harambe like most terms we define on Dictionary.com, but is rather an informal word summary that hopefully touches upon the key aspects of the meaning and usage of Harambe that will help our users expand their word mastery.