or me gusta face

What does me gusta mean?

Me gusta refers to a much-memed image of a grotesquely grimacing face used to show a perverse pleasure at an awkward, uncomfortable, or otherwise normally unpleasurable situation.

Where does me gusta come from? 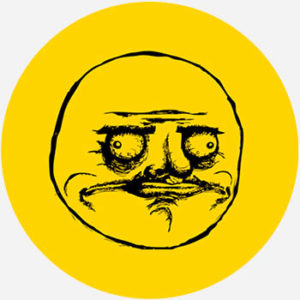 Me gusta is a Spanish verb phrase that translates to “I like (it).” The me gusta face, as the image is commonly called, is a drawing of a bald, moonlike head with a scrunched-up face, pinched lips, and giant, bloodshot eyes that appear as if they’ve popped out of their sockets. The image is used on social media, in web forums, and in webcomics to portray a reaction of guilty pleasure to uncomfortable situations, often of a perverted variety. It read likes a darker visual analog to schadenfreude.

The me gusta image is only one of a collection of exaggerated faces, often drawn with a deliberate crudeness, known as rage comics. Despite the name, rage comics are often less concerned with depicting rage than they are with humorously presenting uncomfortable, awkward, depressing, or disturbing real-life situations, and playing them up for laughs. The face, accompanied by the caption me gusta, functions as a visual gag or punchline portraying the comic protagonist’s true feelings about any given situation. The rage comics memes began in 2008 on 4chan, but very soon found their biggest home in a section of Reddit titled “f7u12,” which in its heyday had 500 to 1,000 new rage comics posted daily.

The me gusta face, which peaked in popularity on Google Trends in early 2012, was first created by illustrator Matt Oswald on March 18, 2010. Matt Oswald conceived of, drew, and uploaded the face in less than fifteen minutes, and had no idea that it had gone viral until his friends informed him a few months later. While Oswald has never directly profited from me gusta’s spread, he does credit the meme’s popularity with landing him many freelance gigs as an illustrator.

Examples of me gusta

“We have all done it....Me Gusta”
Me Gusta @MEGUSTArageface Twitter (June 7, 2012)
“When you're a geek, you get passionate about stuff. Like, insanely passionate. Like, it's sometimes a little much. But it's good to love things. And since all geeks are required to think in memes, the me gusta face is the only true way to express your feelings on these pop culture touchstones.”
Mikey McCollor, “20 Geekiest 'Me Gusta' Faces,” Smosh (March 29, 2012)
“A perfect example is the ‘Me Gusta’ face... 'Its original intent was to portray that you like something you're not supposed to like. Often times, though, the ‘Me Gusta’ face is used for things that you are supposed to like. People accepted the misusage over time.”
Dan Awesome, reported by Tom Connor, “Fffuuuuuuuu: The Internet anthropologist’s field guide to “rage faces”,” Ars Technica (March 12, 2012)
SEE MORE EXAMPLES

Who uses me gusta?

Me gusta is used to express awkward or uncomfortable pleasure at a (usually negative or embarrassing) situation. Its most common use, and original context, is within rage comics, which use multiple panels to tell the story of an everyday experience that is relatable. Due to the popularity of these rage comics, me gusta faces are now often posted on social media or in the comment sections of articles, often as a response image. Me gusta faces are also photoshopped or drawn onto existing human or animated faces.

For example, a video of a celebrity’s wardrobe malfunction might be responded to with a me gusta face, either to express the user’s own strange pleasure at the video or as a way to mock those they think might enjoy it. On the other hand, me gusta can be used to take a normal situation and then make it awkward. One me gusta comic, for instance, shows a person petting a cat. After the cat stretches out its legs and lifts its butt up in the air, the me gusta face and caption appears, implying that either the human, cat, or even the viewer is getting some sort of weird, borderline creepy joy out of it.

The meme’s popularity has led to spinoffs. There is also me gusta mucho—“I like it very much”—which features an even more exaggerated facial expression meant to portray yet more extreme or perverted pleasure at something conventionally unacceptable or a thought people would normally keep to themselves. On the other hand, there is no me gusta (“I don’t like it”), which expresses awkward dislike of something. No me gusta hit the mainstream in a 2016 episode of Cartoon Network’s The Powerpuff Girls, when the character of Bubbles used a variation of it.

This is not meant to be a formal definition of me gusta like most terms we define on Dictionary.com, but is rather an informal word summary that hopefully touches upon the key aspects of the meaning and usage of me gusta that will help our users expand their word mastery.