What does Mr. Krabs meme mean?

Mr. Krabs is a meme, based on a popular cartoon character, used to express confusion or disorientation.

Where does Mr. Krabs meme come from? 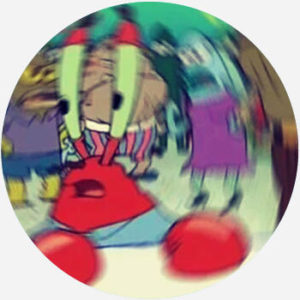 In the cartoon SpongeBob SquarePants, the main character, SpongeBob, is a cook at a restaurant called the Krusty Krab, run by his boss, Mr. Krabs. In a 2001 episode of called “Patty Hype,” SpongeBob comes up with a new version of the restaurant’s signature hamburger, the Krabby Patty, which calls the Pretty Patty (the same burger, but in fun colors). He branches off to sell it on his own after his Mr. Krabs laughs at the idea. The Pretty Patties turn out to be a hit, and Mr. Krabs acquires the rights to sell them himself. The following day, all of SpongeBob’s previous customers come to Mr. Krabs in a mob demanding refunds after discovering Pretty Patties’ unforeseen side effects.

The Mr. Krabs meme is a still image of Mr. Krabs looking around in panicked confusion when the customers confront him. The image, when used as a meme, uses a blur effect, which doesn’t show up in the original episode.

The Mr. Krabs meme was first shared by @isthatahmed on Twitter on January 31, 2016. He posted the image with the tweet caption: “When you just wake up from a nap and your parents already yelling at you.” By 2017, the original tweet had over 6,000 retweets and over 7,000 likes. On February 2, 2016, @WORIDSTARHIPH0P made an exact, uncredited copy of the tweet of its own, which helped it spread to a wider audience. Not long after, the image, with various other captions, was being shared across Twitter, Reddit, Tumblr, and other social media outlets.

By March 2016, the meme had become so widespread that sites like BuzzFeed were aggregating “best of” collections of it. Around the same time, Twitter accounts started to appear, retweeting the Mr. Krabs meme as it came up.

“today i became the mr. krabs meme [Mr Krabs meme parody]”
@warmmilky Twitter (May 8, 2017)
“When you're 79 weeks into there Instagram and you accidentally like a picture [Mr Krabs meme]”
Mr.Krabs @MrKrabs_memes Twitter (March 28, 2016)
“If you were on the Internet in the past week (and where else would you be?) you couldn't possibly have avoided the Mr. Krabs meme. The purveyor of Krabby Patties has been all over Twitter and Instagram, as ubiquitous as the 43rd round of Trump think pieces.”
Ian Servantes, “Here’s the Episode Where That Mr. Krabs Meme Is From,” Complex (March 14, 2016)
SEE MORE EXAMPLES

The Mr. Krabs meme functions in a similar way to tfw (that feel when) or mfw (my face when). The image is usually paired with a tweet-length caption that describes a relatable situation. Captions usually make humorous observations about awkward, uncomfortable, confusing, or disorienting scenarios. The image of a bewildered Mr. Krabs, with the world spinning around him, is implied to reflect the user’s mental state or internal reaction.

This is not meant to be a formal definition of Mr. Krabs meme like most terms we define on Dictionary.com, but is rather an informal word summary that hopefully touches upon the key aspects of the meaning and usage of Mr. Krabs meme that will help our users expand their word mastery.