What does Navy Seal copypasta mean?

The Navy Seal copypasta is a comically aggressive monologue written in the voice of a stereotypical “tough guy,” often reposted as a humorous overreaction to any insult, however small.

Where does Navy Seal copypasta come from? 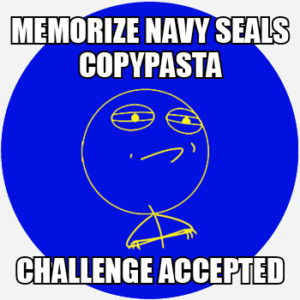 While its exact date of origin is unclear, the Navy Seal copypasta (internet slang for a passage of text that has widely been copied and pasted) is believed to have originated on a military enthusiast message board on 4chat called Operator Chan. The post is from November 11, 2010, Veterans Day.

The message delivers an aggressive rant in a presumed insult against a “kiddo” in the in the persona of a former and hardened Navy Seal who cites absurd examples of his accomplishments in combat like having “over 300 confirmed kills” and being “trained in gorilla [sic] warfare.”

The Navy Seal copypasta did not receive widespread attention, however, until April 4, 2012 when a redditor posted a screenshot of a YouTube comment featuring the copypasta and a reply from another user who apparently took the text seriously, mocking the “Navy Seal” for misspelling guerrilla as gorilla.

On May 22, 2012, another YouTube user posted an ironic, acoustic guitar ballad version of the copypasta called “Navy Seal Copypasta – The Musical.”

Because the popularity of the Navy Seal copypasta has expanded, many alternate versions of the text have appeared online in the voices of other recognizable personas, including Davy Jones, a pretentious Oxford scholar, a Game of Thrones character, and a progressive feminist. For instance, the Oxford Scholar version reads: “What outcry have you uttered about my person, you oafish brute? I shall cordially remind you that I was the best scholar in my law class in Oxford,” a reimagining of the original, “What the fuck did you just fucking say about me, you little bitch? I’ll have you know I graduated top of my class in the Navy Seals.”

As noted, Navy Seal copypasta is a meme often posted as a humorous response to insults and slights on message boards, forums, and other discussions online.