What does Nicolas Cage mean?

There are a number of different Nicolas Cage memes. The most popular include I’m going to steal the Declaration of Independence, NOT THE BEES! and You don’t say?

Where does Nicolas Cage come from? 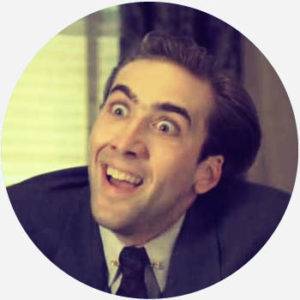 Nicolas Cage memes appeared in their earliest form during the mid-2000s, right around the invention and popularization of YouTube. Initially, short videos were created featuring Cage’s memorable moments from his films, sometimes edited humorously by fans to include cartoon characters or music.

In 2006, Cage starred in The Wicker Man, a remake of a 1973 British thriller. The movie received widespread negative press, and moments of Cage saying particularly clunky, unnatural, or odd dialogue began to circulate in meme form. The two most popular examples are a GIF or image of him screaming “NOT THE BEES!” as numerous bees are poured into a cage around his head, and him demanding information about a singed doll, repeatedly shouting “HOW’D IT GET BURNED!”

As these memes circulated and Cage’s career continued, fans began to dive into the Cage archive to create new memes. “I’m going to steal the Declaration of Independence” from National Treasure (2004) and a black-and-white drawing of Cage’s face contorted into a maniacal expression, taken from Vampire’s Kiss (1988) captioned “You don’t say?” are among the most widespread.

The blog Nic Cage as Everyone, which started in 2009, introduced a wide audience to the joy of photoshopping Cage’s face onto pictures of various other celebrities.

“WITH EVERYONE FOCUSED ON THE ELECTION I'M GOING TO STEAL THE DECLARATION INDEPENDENCE NIC CAGE IS TAKING ADVANTAGE OF ELECTION DAY”
Sizzle Onsizzle (November 8, 2016)
“After rummaging through the World Wide Web in search of The Funniest Nicolas Cage Memes out there, we soon realized that there are about a million Nicolas Cage memes—which is pretty close to the number of horrible movies he's done. The list includes the classic 'Nicolas Cage as Everyone' meme, the iconic black and white 'You Don't Say' image commonly found in rage comics, and plain old creepy shots of the actor's face—check them out!”
Susan Cheng, “The Funniest Nicolas Cage Memes,” Complex (July 24, 2013)
“Somewhere in the past decade, the memeification of Nic Cage began, and since then there have been an innumerable number of macros reminding you that he’s going to steal the Declaration of Independence or that few actors have ever been able to convey unabashed rage and madness in quite the same way that he does.”
Dominick Mayer, “How Nicolas Cage became a living meme,” The Daily Dot (August 21, 2014)
SEE MORE EXAMPLES

Nicolas Cage memes are generally used as humorous responses on social media and forums. “You don’t say?” in particular may appear in rage comics and as a sarcastic reaction image.

Nicolas Cage memes are fairly well-shared across the internet, even by those unfamiliar with the actor himself. In the last decade, Cage has become known for making absurd movies, sometimes with grandiose or unbelievable premises, as well as for his personal financial troubles. As his work and reputation became increasingly bizarre, Nicolas Cage memes became increasingly popular.

This is not meant to be a formal definition of Nicolas Cage like most terms we define on Dictionary.com, but is rather an informal word summary that hopefully touches upon the key aspects of the meaning and usage of Nicolas Cage that will help our users expand their word mastery.