What does No. meme mean?

The No. rage face is an image of a surly, disgusted face used online to express disapproval or refusal.

Where does No. meme come from? 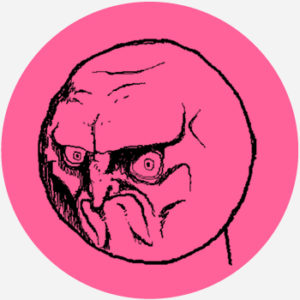 On August 10, 2010, artist Chris Farral, under the username Up2Admin, posted the image that would become known as the No. rage face on a forum dedicated to Cheat Engine, a program used to modify computer games. The drawing depicts a face with an exaggerated scowl and furrowed brow.

Within a year, the image was being incorporated into the user-made online comics known as rage comics, where the No. face is often used humorously to express an irritated disapproval or a refusal to do something, often mundane or everyday tasks, e.g., in response to a computer prompt to update a password or a mother’s request for a child take a shower. One of the earliest examples appeared on the meme-sharing website Memebase. In the first panel, the cartoon character Dora the Explorer says “say it with me.” In the second panel, Farral’s drawing is captioned with “NO.”

In August 2011, the No. rage face was added to the site All the Rage Faces, which aimed to catalog the faces in use in rage comics. A Facebook fan page titled “No! (Rage Face)” appeared. In September 2011, Farral himself posted the image on his DeviantArt account with the title “Nope.” A comment in December notes that the user had seen the image on the videogame subforum of the message board site 4chan, underscoring the meme’s spread online.

Examples of No. meme

Who uses No. meme?

Outside of its appearance in online comics, the No. rage face is also used in memes and as a reaction image, posted to register a put-upon displeasure, often in response to a basic request or to another user’s behavior.

Although the No. rage face is usually copied and pasted online, some users will write out “No. rage face” for the same effect.

This is not meant to be a formal definition of No. meme like most terms we define on Dictionary.com, but is rather an informal word summary that hopefully touches upon the key aspects of the meaning and usage of No. meme that will help our users expand their word mastery.