Feedback
The Hacker Known as ...
They Live Among Us

the more you know

What does the more you know mean?

The More You Know is an NBC public service announcement (PSA) campaign that is popular to parody and use as a meme. The meme is used to explain information in a humorous, incorrect, or absurd way.

Where does the more you know come from? 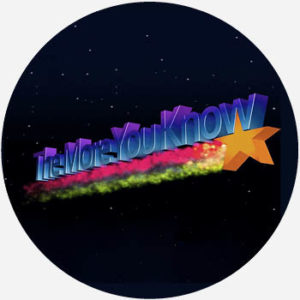 As a phrase, the more you know began in 1989 as part of NBC’s long-running PSAs. The PSAs uses a catchy jingle, and the ending features an animation of a shooting star with a rainbow. Their various short messages emphasized the value of education and the importance of reading, targeted to interest teenagers.

In the late 1990s, Conan O’Brien started parodying the PSAs on his show Late Night with Conan O’Brien, which aired on NBC. In 2006, Scrubs and The Office (also NBC shows) produced similar parodies of the PSAs. At this point, the focus was on the tone and cadence of delivery, parodying the solemn way information on The More You Know was conveyed. As parody videos by non-celebrities started to surface on sites like YouTube, they copied this initial humor. Many of these parodies did not even end with the signature shooting star animation, but by that time, the PSAs were so well-known, this imagery was not required for viewers to understand the reference.

The meme evolved over time to be much more stripped-down and simplified. It morphed from its original audio-visual format to a block of text, as users adapted it for use on other social media platforms like Twitter, Tumblr, and Reddit. In place of a video, these posts often feature a static image or a GIF of just the shooting star animation following a sentence or two in the style of the original PSAs.

Examples of the more you know

“OMG KATY PERRY JUST DID 'THE MORE YOU KNOW'”
Isaac World of Isaac Twitter (February 1, 2015)
“‘today I learned that if you want to slash someone’s tires, don’t slash all four; only slash three because if you slash all four their insurance will pay for it but if you only slash three they have to pay for it all out of pocket.’ The More You Know”
montypythonandtheholyblog Tumblr (August 26, 2012)
““It's your first time babysitting … then your friends call and invite you to a big party, and he's going to be there. What are you going to do? Well, I think we both know the answer. Find the family liquor cabinet and put some Kahlua in the baby's milk.’ … The More You Know”
Conan O'Brien, Late Night with Conan O'Brien NBC (1997)
SEE MORE EXAMPLES

Who uses the more you know?

References to the more you know meme can be made verbally, with the speaker sometimes making a gesture with their hands to indicate the movement of a shooting star or the shape of rainbow, and possibly even saying it in a voice that mimics the original PSA tone.

It’s fascinating to note that the initial parodies that sparked the meme seemed to come from the network that aired the PSAs in the first place, NBC.

This is not meant to be a formal definition of the more you know like most terms we define on Dictionary.com, but is rather an informal word summary that hopefully touches upon the key aspects of the meaning and usage of the more you know that will help our users expand their word mastery.

The Hacker Known as ...
They Live Among Us
Home / Words / Memes / the more you know