Feedback
What are those?!
You the real MVP

or Y U NO meme or why you no

What does Y U NO mean?

Y U NO guy refers to a grotesque and desperate rage comic character used to express humorous exasperation, especially about everyday grievances.

Where does Y U NO come from? 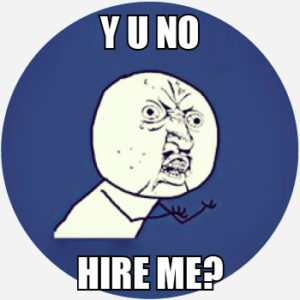 Y U NO, a phrase that is intentionally and playfully grammatically incorrect, refers to a crudely drawn character who has a round head, bugged-out eyes, wrinkled features, and a desperate, crazed expression. He reaches out to his left with stick figure arms, as if pleading for some unseen person to see the fault in their actions. His catchphrase reads Y U NO _____, followed by something he is reprimanding someone or something for, e.g,. “Monday, Y U NO Friday?!” or “I txt U. Y U NO txt bak?!”

The Y U NO guy is just one character in a collection of exaggerated faces known as “rage comics.” Despite the name, rage comics are usually not so concerned with “rage” so much as humorously displaying uncomfortable or awkward real life situations. The Y U NO guy functions as a visual gag or punchline that reveals the protagonist’s true feelings in response to a situation. The rage comics memes began on 4chan between 2007 and 2008, but very soon found their biggest home in a section of Reddit titled “f7u12.”

The Y U NO guy himself, with his distinctive outraged and bug-eyed face, appears to be inspired by a panel in a 2002 issue of the Japanese manga Gantz. According to a fan-based database called Meme Wikia, the first instance of the Y U NO guy meme, converted into his more familiar stick figure form, occurred on Tumblr, featuring the caption “I txt u. Y U NO txt bak?!”

As a meme, Y U NO peaked in popularity toward the end of 2011, though his catchphrase Y U NO is often used without the image. The original source for the phrase Y U NO is unclear, though it it could imply the character is a non-native English speaker or so beside himself with emotion than he stumbles over his words, as is common in internet slang grammar and spelling conventions. The full phrase “Why you no ___” has been used humorously online since at least the 1990s.

Examples of Y U NO

“@leastlikely UH HELLO IT IS WHAT'S FOR DINNER, Y U NO READ”
Amanda Sharpe @amandathegreat Twitter (March 1, 2009)
“Y was I so dumb dat i thought dat i would get support from my parents 'If you cant make it you cant play, y u no study until you go bed”
@LinusIhrfors Twitter (April 26, 2017)
“Political memes: y u no work? [title]”
Sarah Burnside, “Political memes: y u no work?” Overland (June 23, 2014)
SEE MORE EXAMPLES

The Y U NO guy meme is meant to show anger, exasperation, or confusion about minor daily issues or discomforts that, while petty, secretly enrage people. Sometimes it can also be used to represent the irritation that fictitious characters might have if we were able to peek into their minds. For one example, one meme depicts Y U NO guy as being Harry Potter asking “Voldemort, Y U NO be named?!”

When using the Y U NO guy, some memes have swapped out his head for characters like Darth Vader, e.g., “Luke, Y U NO come to the dark side?” or No-Face character from Spirited Away, e.g., “Little girl, Y U NO accept my gold?!” Sometimes the character’s appearance is only slightly modified to resemble other popular characters like Mario or the Joker.

Outside of his face and catchphrase, the Y U NO guy is also recognized for his posture, most notably his little stick arms held out in pleading exasperation.

This is not meant to be a formal definition of Y U NO like most terms we define on Dictionary.com, but is rather an informal word summary that hopefully touches upon the key aspects of the meaning and usage of Y U NO that will help our users expand their word mastery.