Feedback
Voice Changer 3000
Y U NO

What does What are those?! mean?

Your shoes, dude! What are those?! Reaching meme status in the mid-2010s, What are those?! is a humorous expression used when someone is wearing a pair of unattractive shoes. Bonus points if you draw it out with thooooooose.

Where does What are those?! come from? 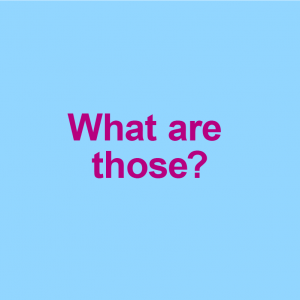 The expression What are those?! was entered on Urban Dictionary in October 2011, but it went viral in June 2015 when Instagram user @youngbusco posted a video of himself asking a police officer What are those?! about his basic black work boots.

What are those?! became a playful takedown of ugly or unbecoming shoes. It was usually set up with I have one question for you before dramatically delivering What are those?! with a drawn-out those.

And true to memes, the video immediately spawned its imitators. In one, a teenager asks his grandmother of her footwear What are those?! Not in on the joke, she hilariously responds: “They’re my Crocs.”

In another, some attendees of Michael Jordan’s basketball camp asked the icon What are those?! Jordan also didn’t get the joke. That’s OK, though, because few would ever say What are those?! of his namesake kicks, Air Jordans.

At the height of the meme, What are those?! went to the highest office in the land, puzzling over President Barack Obama’s basketball sneakers.

The meme endured, and in the 2018 film Black Panther the character Shuri (Letitia Wright) asks What are those?! of the Black Panther himself.

Examples of What are those?!

when we all screamed "what are those" when they showed harrys boots #OTRASantaClara
@lovelessly, July 11, 2016
Almost immediately upon seeing photos from the Wests' wedding outing, people took to social media to express their confusion over the musician's choice of footwear. While some firmly stated their belief that socks and sandals should be reserved only for quick runs out to the car or mailbox, others simply had to ask: "What are THOOOOOSE?!"
Andrea Park, Brides, August 2018

Who uses What are those?!?

Though peaking in 2015–16, What are those?! remains a lighthearted mockery of questionable shoes. Targets often include Crocs, sandals (especially when worn with socks), work shoes, and even funky-looking feet.

One way What are those! lived on as a meme is by dissing any odd clothing choice or look that isn’t really coming together.

joshua's pants give off a really high "what are those" energy pic.twitter.com/KyM4gSpRMC

This is not meant to be a formal definition of What are those?! like most terms we define on Dictionary.com, but is rather an informal word summary that hopefully touches upon the key aspects of the meaning and usage of What are those?! that will help our users expand their word mastery.