What does baller mean?

A baller can refer to a great basketball player or a lavishly successful person. It can also describe someone or something as “excellent,” especially in some spectacular way. The term is often pronounced and written as balla in African American Vernacular English.

Where does baller come from? 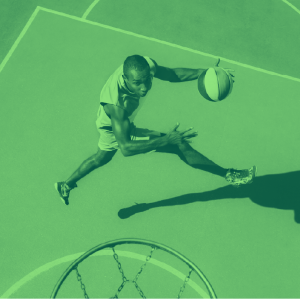 Early uses of baller referred to someone who partakes in a formal ball in the late 17th century, historically associated with a group of libertines during the English Restoration. Baller was also used as an occasional slang term for a hedonist in the mid-20th century. A baller, less excitingly, is also the name of a tool that shapes things into balls.

The modern slang baller, however, has its roots in sports. Players of various ball sports have been called baseballers, footballers, or basketballers since the 19th or early 20th century. Baseballer was in use by the 1860s. Footballer was used for soccer players by the 1870s and American football players in the 1880s. A 1938 magazine called one athlete “a corking good basketballer.”

Basketballer is still in use today and has been clipped to baller in hip-hop lyrics since the late 1980s. In his 1988 “The Syndicate,” rapper Ice-T describes “Ballers, mafia, down to throw, gangstas, convicts, throwin solid blows.” Here, a baller had come to be a successful person, living an ostentatious lifestyle, which specifically pointed to the lavish spending of some professional basketball stars during that time. Some lyrics also use baller to refer to basketball players specifically. Hip-hop group Above the Law described Los Angeles as “where the hustlers hustle and the ballers play” in 1990’s “Livin’ like Hustlers.” A 2004 video game titled NBA Ballers combined both senses, allowing players to buy cars and houses for their characters. Baller also occurs as an adjective in the early 1990s, being used, for example, by Ice Cube in 1991’s “How to Survive in South Central.”

Now, athletes in sports other than basketball are sometimes called ballers. It’s usually used to refer to exceptionally skilled players. By extension, in casual conversation a person who is skilled at any task may be considered a baller. Thanks to its association with skill, baller has further evolved as a slang term for “excellent,” much like the term badass.

Just ask @Zionwilliamson and @JaMorant ... @Devontae_Shuler is an absolute baller 🥶
@SECNetwork, March 10, 2021
That's Mitch being a baller and trying to make a play ... I'm excited for his future because he's a baller.
Zach Miller quoted by Kevin Patra, NFL.com, October 9, 2017

Baller is predominantly used in the worlds of sports and hip-hop, but it has spread into the culture at large, used as a noun and modifier for something or someone flashy, skilled, or exceptional.

.⁦@UConnWBB⁩ got a controversial 2-seed in the #NCAAW tourney. For ⁦@FiveThirtyEight⁩, I looked at how they stack up to the last 6 Huskies 🏆 squads. (Shoutouts to ⁦@herhoopstats⁩ for data & ⁦@PHEEsespieces⁩ for being a baller!) https://t.co/H8AFYqzGfp

LaVar Ball, father of basketball players Lonzo, LiAngelo, and LaMelo, founded a clothing brand called Big Baller Brand, playing on the association of the name with both sports and fashion.

There is also an HBO sitcom titled Ballers about football players.

This is not meant to be a formal definition of baller like most terms we define on Dictionary.com, but is rather an informal word summary that hopefully touches upon the key aspects of the meaning and usage of baller that will help our users expand their word mastery.