Everything After Z by Dictionary.com
Previous Word: dog whistle
Next Word: Dubya

The #SwampKing never intended to Drain the Swamp
@JasonHalle, May, 2018
...big dollars ($700,000) for his wife's political run from Hillary Clinton and her representatives. Drain the Swamp!
@realDonaldTrump, July, 2017
Last night’s drain-the-swamp chant in Indiana was a grand Orwellian spectacle. Trump has so perverted the language that his howling supporters have no clue the phrase refers to rooting out the corruption that defines his administration. They think it means, “Go team! Boo others!”
@waltshaub, May, 2018

Where does drain the swamp come from? 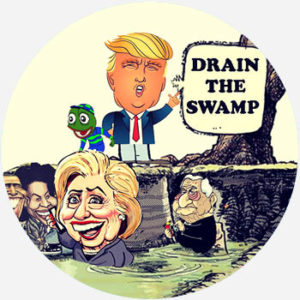 The phrase drain the swamp was originally popularized to reference the literal removal of water from marshy areas. Removing the water would also remove mosquitos, alligators, and other creatures that depended on the water.

Drain the swamp has since been adopted by politicians who use the phrase as a metaphor that means to “root out corruption.” You may have heard that drain the swamp is a reference to the United States’ capital, Washington, D.C., being built on swampland; however, that myth has been debunked. It has also been rumored that drain the swamp was taken from Italian dictator Benito Mussolini, who was known to use the phrase “drenare la palude” (Italian for drain the swamp). While it is true that Mussolini used that phrase, it was sometimes in reference to literal swamps outside of Rome known as the Pontine marshes which were drained to prevent the spread of malaria (see above).

It’s also been found that the phrase was already in use before Mussolini helped form Italy’s Fascist Party in 1919. So there.

One of the earliest users was Victor L. Berger, a founding member of the Social Democratic Party of America. In a book called Capital Opinion, published in 1912, Berger wrote, “We should have to drain the swamp — change the capitalist system — if we want to get rid of those mosquitos.”

Drain the swamp has since been used by members of different political parties. Republican President Ronald Reagan used the phrase in his 1976 presidential campaign, stating, “Sometimes, when you are up to your elbows in alligators, it is hard to remember your original objective was to drain the swamp. I think we can drain the swamp. We can take on the Washington system. We can change from remote control to personal control of our lives.”

Shortly after being elected Speaker of the House in 1996, Democratic Congresswoman Nancy Pelosi said she would drain the swamp in a Congress that had long been controlled by the GOP.

But, the phrase has most recently been used by President Donald Trump during the 2016 presidential race. Drain the swamp started as one of the Trump campaign slogan and has been employed by the Trump White House in tweets and other official statements since the 45th president took office in January, 2017.

I will Make Our Government Honest Again — believe me. But first, I’m going to have to #DrainTheSwamp in DC. https://t.co/m1lMAQPnIb

Who uses drain the swamp? 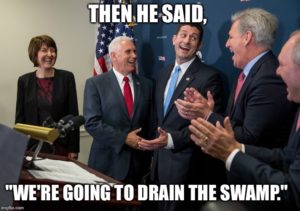