What does Dubya mean?

Dubya is a nickname for the 43rd president of the United States (2001–2009), George W. Bush. It’s based on that middle initial, W., used to differentiate him from his equally presidential father of the same name.

Where does Dubya come from? 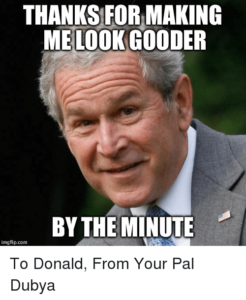 When George W. Bush became the top Republican candidate in the 2000 presidential election, it caused a conundrum the likes of which hadn’t been since the days of John Quincy Adams. Bush’s father, the 41st president, was also George Bush, so what were people supposed to call round two if he were elected?

Rather than going with the likes of George Bush, Jr., the point of differentiation became the younger Bush’s middle initial, W., which stands for Walker. But, thanks to his Texas twang, Bush pronounced W as a folksy, Southern-y dubya as opposed to double-U.

When Bush first got the nickname isn’t exactly clear (he was governor of the Lone Star State from 1995–2000, not to mention spent his entire previous life as a JR). Perhaps he even nicknamed himself, considering his habit of nicknaming others, calling Russian president Vladimir Putin Pootie-Poot and his senior advisor, Karl Rove, Turd Blossom.

When Bush accepted the nomination for the Republican party in 2000, he even poked fun at the nickname while referring to George Washington in his speech, “or, as his friends, called him, George Dubya.”

2000 was indeed when Dubya spread. The nickname appeared on news sites, internet message boards, in books, and on the website Dubya Speaks, which chronicled his many Bushisms, or his amusing speech errors.

And though Bush developed many other nicknames throughout his time in office, both positive (The Decider) and negative (Shrub), nothing stuck like Dubya.

imgflip
Let's all look back at Ohio in the Dubya/Gore election to see how this works.
@veritas_24, August, 2018
Earlier this week, we commented on Dubya's second act as 24 paintings of different world leaders were released to the public during a pre-recorded segment on The Today Show with Bush's daughter as the interviewer.
Adam Chandler, The Atlantic, April, 2014
SEE MORE EXAMPLES

While many presidential nicknames tend to be negative, such as Bill Clinton’s Slick Willy or Donald Trump’s Drumpf, the name Dubya can go either way. It’s used affectionately by his supporters and derisively by his detractors. It’s also used more neutrally simply to refer George W. Bush … in order to distinguish him from his father.

And BTW the notion that the GOP must lose to change is historically inaccurate. The GOP changed from Gingrich to Dubya WITHOUT losing any power.

The Dubya Administration was our political WWI. Finished…but never finished. Settled but never really over. A disaster which too many people were too desperate to forget and move on from without eliminating the root causes.

And oh, you might hear people from the South or in other regional dialects of English pronouncing the letter W as dubya … no relation to the president.

This is not meant to be a formal definition of Dubya like most terms we define on Dictionary.com, but is rather an informal word summary that hopefully touches upon the key aspects of the meaning and usage of Dubya that will help our users expand their word mastery.