What does Trumpian mean?

Trumpian is an adjective form for President Donald Trump. The term is especially used by critics to characterize his language, conduct, and policies.

Where does Trumpian come from? 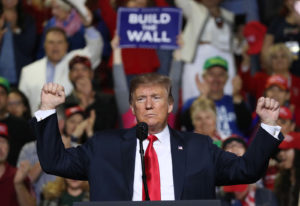 The term Trumpian is found as early as 1988 in an issue of Yachting magazine, where a reviewer, calling up Donald Trump’s 1987 The Art of the Deal, describes Dennis Conner’s book The Art of Winning as being “well within a Trumpian vein.” The next year, an issue of Sports Illustrated called small, charming villages that the Tour de Trump bike race ran through as being “as un-Trumpian as Montgomery Ward,” an American retail catalog and department store.

Alluding to Donald Trump’s growing and sensational celebrity status, a 1990 example of this term referenced “Trumpian headlines in the tabloids.” In the early 1990s, Trumpian especially characterized large-scale business failures (“a Trumpian tumble”) or financial woes (“Trumpian debt”), alluding to the real estate mogul’s own difficulties at the time. These early uses figure Trumpian as “excessive” or “ostentatious,” alluding to Donald Trump’s notoriously bombastic personality and aggressive, grandiose approach to doing business.

Trumpian took off after Donald Trump launched his presidential campaign in 2015. Thanks to how many view Trump’s rhetoric and conduct, Trumpian began to describe blustering, narcissistic behavior and a brazen disregard for truth. Others began use Trumpian to characterize racist, sexist, and xenophobic ideologies, authoritarianism, and an angry brand of populism. After he won the White House in 2016 following an unorthodox campaign, some observers have taken to describing the broader culture under Trump’s candidacy and presidency as the Trumpian era, which has witnessed a spike in racism, sexism, bullying, and political subjectivity.

Trumpian logic: .@POTUS says of our public lands 'there is nothing more beautiful anywhere in the world.' Then acts to rollback protections
@virginia_cramer, April 2017
It was an oddly Trumpian, self-congratulatory characterization of a record-short stint that ended in disaster.
Frida Ghitis, CNN, February 2017
“Salon has dubbed it ‘the novel that foreshadowed Donald Trump’s authoritarian appeal,’ while Slate’s Jacob Weisberg writes that you can’t read the book today ‘without flashes of Trumpian recognition.’”
Carlos Lozada, Washington Post, June 2016
SEE MORE EXAMPLES

While the term is occasionally used to refer neutrally to Donald Trump himself (e.g., a Trumpian policy as a “policy pursued by Donald Trump”), Trumpian is more widely used a pejorative term for people, actions, or philosophies that are felt to evoke Donald Trump’s beliefs, mannerisms or over-the-top demeanor. Since Trump’s election as president in 2016, Trumpian has come to embody what opponents of Trump supporters see as the defining qualities of Trump’s political ideology: sexism, racism, xenophobia, arrogance, a deluded love of self, and a willful lack of truthfulness. For example, when actor Michael Keaton played McDonald’s founder Ray Kroc in The Founder, he referred to Kroc in an interview as being Trumpian, stating that Kroc was “less than ethical.”

There have been attempts by some politicians, such as Newt Gingrich, to use the phrase Trumpian in a positive, complimentary light in regard to Trump’s unconventional, anti-establishment, “tell-it-like-it-is” approach to politics, but these uses of this sense of Trumpian are in the minority.

This is not meant to be a formal definition of Trumpian like most terms we define on Dictionary.com, but is rather an informal word summary that hopefully touches upon the key aspects of the meaning and usage of Trumpian that will help our users expand their word mastery.