Feedback
May the Fourth be wi...
Megxit

What does McDonald Trump mean?

McDonald Trump is a mocking nickname for the 45th president of the United States, Donald Trump, referencing his love of fast food, particularly McDonald’s.

Where does McDonald Trump come from? 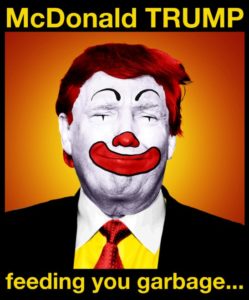 It’s no secret that President Trump is a big fan of fast food, especially McDonald’s. He told CNN’s Anderson Cooper in February 2016 that he likes McDonald’s and similar fast food restaurants because he’s a germaphobe and considers fast food “safe.” His love for McDonald’s didn’t stop when he took up residence in the White House. 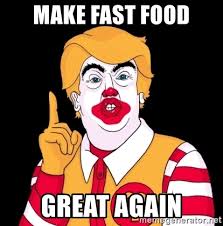 The New York Times has dubbed Trump “the nation’s fast-food president.” Others have nicknamed him McDonald Trump, McDonald a clear play on the hamburger chain McDonald’s and Trump’s first name, Donald.

McDonald Trump appeared in April 2016 in an article in the Milwaukee Courier by student journalist Tisia Muzinga, who nicknamed then-candidate Trump as McDonald Trump.

Another early reference to the McDonald Trump comes from the liberal French newspaper Libération in a December 2016 review of the biopic The Founder, about Ray Kroc, who helped make McDonald’s into a fast food empire. The article quotes the 18th-century philosopher Helvétius as saying: “All people who, by the stupidity of their leaders, arrive at this state of indifference, are as barren of significant talent as they are of significant virtues.” The article then snidely remarks: “You couldn’t find a better description of American fast food. And the sad inventors who gave birth to McDonald Trump.” 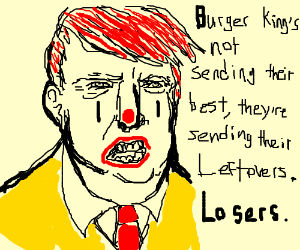 The nickname McDonald Trump took off, however, on January 14, 2019, when President Donald Trump served a smorgasbord of fast food, including McDonald’s, to the national collegiate football champions, the Clemson Tigers, at the White House. Trump had to find an alternative catering option thanks to his federal government shutdown, as much of the White House staff was furloughed. Trump’s fast food feast garnered a ton of ridicule on social media, including use of McDonald Trump.

McDonald Trump is bringing back the federal government for a limited time like its the McRib....
@stonecold2050, January 2019
One person who ignores this big issue [racism] is: Donald Trump. Or what I like to call him, “Ronald McDonald Trump."...A clown who could potentially lead, represent, and be the face of our country.
Tisia Muzinga, Milwaukee Courier, April 2016 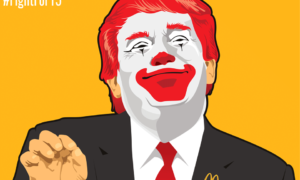 McDonald Trump, as we’ve seen from the examples above, is meant to deride Donald Trump as déclassé—as unworthy of the office of the presidency.

After the now-famous Clemson Tigers White House visit, the term McDonald Trump jumped in popularity, engendering countless memes and drawing parallels between Trump and McDonald’s iconic clown mascot, Ronald McDonald. Not to put too fine a point on it, the McDonald Trump memes tend to imply that the president, not unlike fast food itself, is bad for your health.

This is not meant to be a formal definition of McDonald Trump like most terms we define on Dictionary.com, but is rather an informal word summary that hopefully touches upon the key aspects of the meaning and usage of McDonald Trump that will help our users expand their word mastery.