What does Trumpism mean?

Trumpism refers to the nontraditional political philosophy and approach espoused by US President Donald Trump and his supporters. The term Trumpism can also be used to directly refer to an outrageous or idiosyncratic statement made by Donald Trump.

Where does Trumpism come from? 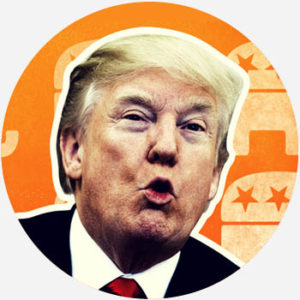 Google Trends indicate that searches for Trumpism took off in July 2015, a month after real estate mogul Donald Trump announced his bid for the US presidency. By August 2015, both senses of Trumpism were in common use in the mainstream, making their way into major media sources.

In a July 2015 speech, then-presidential candidate Rick Perry defined Trumpism as “a toxic mix of demagoguery, mean-spiritedness, and nonsense that will lead the Republican Party to perdition if pursued.” When the presidential debates began in August 2015, lists of Trumpisms were compiled by publications such as The Washington Post and Politico.

Seth Millstein published a book titled Trumpisms in December 2015. The book is a collection of “the most mind-boggling, insane, crass, ignorant, and downright offensive statements” from speeches, tweets, and books by Donald Trump.

The term spiked on Google Trends twice: in November 2016 and January 2017, coinciding with the general election and the days following President Trump’s inauguration.

As a political philosophy, Trumpism is an anti-establishment blend of economic populism, reactionary nationalism, and strong militarism summed up in Trump’s campaign slogan, “Make America Great Again.” Due to bigoted statements Trump had made and the viewpoints of some of his base, Trumpism is sometimes associated with white supremacy. Despite the flexibility and reversals of Trump’s political positions, some political observers see Trumpism as a hard and fast ideology.

Trumpisms are characteristic of Trump’s distinctive style of communicating. Linguists explain that the president speaks in hyperbole and non-sequiturs, which make parsing his comments in writing more difficult than understanding them in speech or with visual cues. Trumpisms feature short, exaggerative catchwords like Sad!, huge, and superlatives like greatest, best, or most beautiful.

While very different in style and content, Trumpisms nod to Bushisms, former President George W. Bush’s malapropisms and mispronunciations, such as “nuculer” and “misunderestimated.” Like Bushisms, Trumpisms have provided ample fodder for comedians, notably including recurring President Trump impressions by Alec Baldwin on Saturday Night Live.

“#trumpism is giving a moving speech about the slaughter of Syrian children while at the same preventing their escape with a travel ban.”
Randahl Fink Isaksen @R4nd4hl Twitter (April 10, 2017)
“Someone start a dictionary of #Trumpisms. Transparency =.evasion... Compassion = Bombtime! Tweeting = Qualitytime! Trump =BIG BOY! Etc...”
@mirandajseymour Twitter (April 15, 2017)
“She was put off by Trump during the Republican primaries, strongly preferring candidates like Marco Rubio and Ted Cruz, but now finds herself searching for something in Trumpism to get excited about.”
McKay Coppins, “The Trumpist Temptation,” The Atlantic (February 25, 2017)
SEE MORE EXAMPLES

The ideological Trumpism is typically used in serious discussions of American politics and in the context of Trump’s candidacy and presidency. Linguistic Trumpisms tend to be more mocking caricatures. Both meanings are generally used by critics of the president and can be used pejoratively.

#Trumpism and #Trumpisms are both popular hashtags on Twitter, often accompanying quotes from Donald Trump and used in critique of those quotes.

This is not meant to be a formal definition of Trumpism like most terms we define on Dictionary.com, but is rather an informal word summary that hopefully touches upon the key aspects of the meaning and usage of Trumpism that will help our users expand their word mastery.