What does Trust the Process mean?

Trust the Process is a slogan used by fans of the NBA’s Philadelphia 76ers, though it has since become popular elsewhere in sports and culture. Coined during a rough patch for the team, it basically means “things may look bad now, but we have a plan in place to make it better.”

Where does Trust the Process come from? 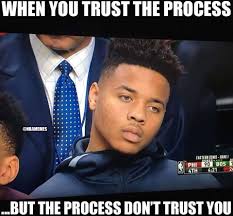 Trust the Process actually shows up in a couple of unrelated books well before Sixers fans started saying it. Trust the Process was the title of a 1996 book on addiction recovery and a 1998 guide for artists. In any challenging project, it can help to focus on (trust) what you can control (the process) rather than the outcome.

The association of Trust the Process with basketball’s 76ers goes back to 2013. In May that year, the team’s new general manager Sam Hinkie advocated an emphasis on process over outcome in his first speech with the team. Under Hinkie’s leadership, the team traded away star player Jrue Holiday for Nerlens Noel and a first-round draft pick. This started an, ahem, process of tanking, or giving up short-term wins in order to get better draft picks in the future. Not everyone loved the idea, but some fans on Twitter started saying “in Hinkie we trust.”

Hinkie himself brought up trust along with process, discussing his relationship with head coach Brett Brown. In February 2014, sportswriter Matt Lombardo tweeted: “[E]mbrace the struggles for the rest of the year and trust in Hinkie, the process.” 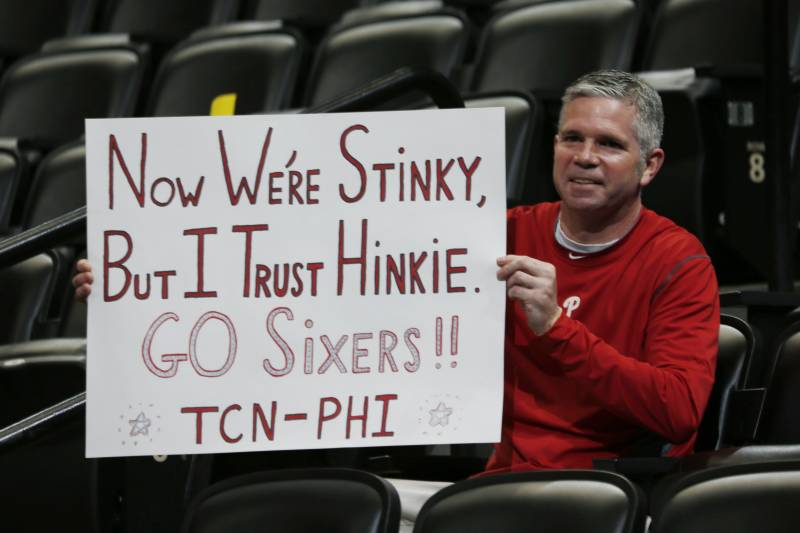 In 2014, Hinkie used one of those draft picks on Joel Embiid, a player who, due to injuries, wouldn’t be able to play that season (and wouldn’t play in the NBA until 2016). Echoing Hinkie, Embiid encouraged fans to trust the process. Again, fans would have to wait for the payoff. Embiid became the player most associated with Hinkie’s process and even adopted The Process as his nickname.

Around the same time, baseball’s struggling Houston Astros were also embracing the rebuilding process, selling T-shirts that said Process in the team’s colors. Two Philly fans and podcasters, Michael Levin and Spike Eskin, started making Trust the Process T-shirts. Sportswriter Pablo Torre held up one of the shirts on ESPN’s sports roundtable Around the Horn, bringing the phrase to a national audience.

Not everyone at ESPN was a fan of the process, though. Stephen Smith called it an atrocity in 2015 and reiterated his disdain on ESPN in 2017. Admittedly, things didn’t look great: The Sixers had a record-breaking loss streak in 2015, and eventually Hinkie resigned.

What the @Sixers are doing to their fanbase is an absolute ATROCITY. The commissioner should intervene. pic.twitter.com/1WQ8LSpXR6

Had the process failed? Nope. In 2016, the sports news site 12Up named the Sixers one of the six NBA teams with the best young talent, pointing to Embiid among others. In the 2017 season, they went 52-30, finished third in the conference, and went to the playoffs. Even without Hinkie around to see it, it seems like the process is finally paying off.

Examples of Trust the Process

Facebook
Each day is an opportunity to get 1% better. Consistently taking small steps in the right direction leads to big results over time. Trust the process.
@Justinsua, August 2018
There has been a lot of upheaval about UCLA football’s recruiting strategy, but fans should trust the process because Chip Kelly has everything under control.
Mike Regalado, Fansided , July 2018
SEE MORE EXAMPLES

Who uses Trust the Process?

Trust the Process has spread beyond 76ers fans into culture at large. Sometimes, it’s used for motivation and positivity, to say “things may not be great now, but have faith they’ll work out.” You may hear the phrase at a yoga class or on a self-help blog just as much as at a sports bar. In a teaser for his 2017 album Trust the Process, Ace Hood rapped: “Even when it’s tough you keep on pushing that’s the concept / Keep your head up, keep the faith and Trust the process.”

"Even when it's tough u keep on pushing that's the concept keep your head up, keep the faith and Trust the process." — 📝August 21st ✨ @hoodnation @foreignteck

It can also mean to focus on what you’re doing and not worry so much about the outcome, something like “stop and smell the roses.” On the other hand, it can mean to stick to the plan and not chase short-term distractions. A writer for the finance website Seeking Alpha compared the planning and patience of stock market investing to Hinkie’s process and urged investors to trust the process.

Reflecting the faith fans put in Hinkie, Trust the Process can also mean something like “everyone chill out. We got this.” In 2017, White House Communications Director Anthony Scaramucci (remember him?) said on CNN that regulations on healthcare should be eased like those on airlines and telecom companies (because everyone loves airlines and their cable company). He said we should “trust the process of the free market.” 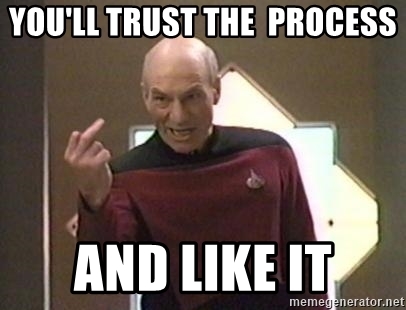 Of course, trust the process remains popular in sports. It has been adopted by players and fans across sports from baseball and football to soccer and rugby—and of course, remains a rallying cry for all things 76ers.

This is not meant to be a formal definition of Trust the Process like most terms we define on Dictionary.com, but is rather an informal word summary that hopefully touches upon the key aspects of the meaning and usage of Trust the Process that will help our users expand their word mastery.