What does basketball head mean?

A basketball head is an avid fan or hobbyist player of the sport of basketball. The term can also be used as an insult for someone perceived to have a large head.

Where does basketball head come from? 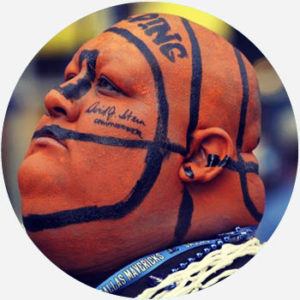 Calling a deeply or obsessively devoted fan of something a head goes back to at least the early 1900s with hoghead, a slang term for a “railroad engineer.” One more prominent example dating to the 1970s is a Deadhead, or a loyal follower of the jam-band The Grateful Dead. Metalhead (a lover of metal music) and petrolhead (a motor-racing enthusiast) are other examples. The implication of the –head suffix is that the fan’s head is only full of the object of their fascination—as a basketball head is invested in basketball, a term which dates back to at least the 1970s. Jack Olsen’s 1976 basketball novel Massy’s Game, for instance, notably uses the phrase.

Basketball heads are non-professional people who play basketball extensively and form communities around the sport. They also include non-players who not only follow professional basketball but pride themselves on extensive knowledge of its history, technique, and current players. A strong passion for the game, whether on the court or around the trivia table, makes for the defining characteristic of a basketball head.

Dubs fans and real basketball heads been saying this for YEARS
@ToAREaLLeo, March, 2018
Journalists, historians, and college basketball heads have thankfully kept the Ramblers story alive, to the point that the surviving team members were invited to the White House by President Barack Obama in 2013 to memorialize their mark on the game.
Nick Martin, Deadspin, March, 2018
I didn't capitalize bible, 'cause that is reserved for the Good Book, but this magazine is just that: a tremendous magazine that covers just about every aspect of basketball you can imagine. True basketball heads will appreciate this magazine, as well as people who really want the know-how on who's up and coming in the sport.
nikefreak, Epinions (forum), July, 2004
SEE MORE EXAMPLES

Basketball head is colloquially used in speech and writing often by basketball heads for basketball heads, a diverse group of people united by their love of the game at all levels, though especially college and professional. It is usually a label of pride, acknowledging or self-identifying dedication to and knowledge of the sport. Sports journalists also use the phrase for die-hard basketball fans.

Basketball head is seldom used for professional players of basketball, though they themselves may technically be basketball heads. Very occasionally, a basketball head may refer to large cutouts of celebrity heads—often called “big heads” or “fan heads”— brandished by spectators at basketball games.

The insult basketball head, while pejorative, is primarily viewed as mild and juvenile.

This is not meant to be a formal definition of basketball head like most terms we define on Dictionary.com, but is rather an informal word summary that hopefully touches upon the key aspects of the meaning and usage of basketball head that will help our users expand their word mastery.