What does Battletoads mean?

Battletoads refers to a 1991 video game for Nintendo. It’s also the name of a prank, wherein people call game stores asking if they have a copy of Battletoads.

Where does Battletoads come from? 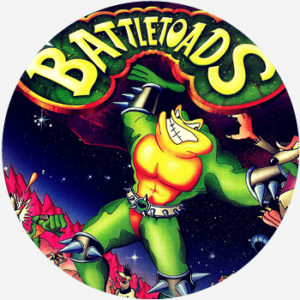 In 1991, Nintendo released the video game Battletoads, which many saw as trying to capitalize on the success of the Teenage Mutant Ninja Turtles. A “beam ‘em up” or “brawler” game, Battletoads lets gamers play as Zits, Rash, and Pimple, a team of hip, muscular, anthropomorphic space toads who have to combat enemies on their way to rescue a princess from evil forces. The game was known for being incredibly difficult—and quite strange. Though it remained fairly obscure, Battletoads was initially successful enough to get a number of sequels, and even be adapted into a thirty-minute animated pilot in 1992. The pilot was never picked up for a full series.

I'd laugh if someone just randomly walked into the the lobby and asked,'Is this battletoads?'
@SaedaSM, June 26, 2011 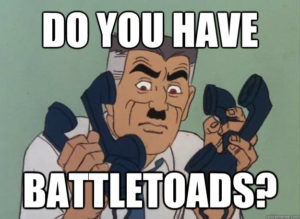 warosu.org
That was all she wrote for Battletoads for the next couple decades. The most we ever got was a prank call/hoax thing where people would constantly call up Gamestop to ask if they could pre-order a nonexistent Battletoads reboot for Xbox.
Gavin Jasper, “Battletoads: The Strange History of a Nigh-Impossible Franchise,” Den of Geek, August 4, 2015
SEE MORE EXAMPLES

In 2007, users from Anonymous, 4chan, eBaum’s World, and other forums began prank-calling Gamestop stores asking if they had a copy of Battletoads or requesting a preorder of it. Obviously, it was unlikely that Gamespot would be carrying the short-lived, 15-year-old game, and no new version of Battletoads had been announced. But more inexperienced or younger Gamestop employees were caught off guard by these pranks, searching the stores and database for a supposedly hot new title that didn’t exist. Callers would request Battletoads for Wii, Battletoads II, and other made-up titles, resulting in confusion. The prank spread virally and reportedly flooded Gamestops. In 2008, a fake Battletoads for Wii trailer was posted on YouTube.

The franchise’s relative obscurity, short life, and all-around weirdness inspired the Battletoads memes. According to Encyclopedia Dramatica, by at least 2007, users on the online imageboard site 4chan were jokingly asking the question “Is this Battletoads?” in response to any user seeking the title of an older or unknown game.

This is not meant to be a formal definition of Battletoads like most terms we define on Dictionary.com, but is rather an informal word summary that hopefully touches upon the key aspects of the meaning and usage of Battletoads that will help our users expand their word mastery.