What does basic bitch mean?

Basic bitch is a term used to condescendingly refer to women who have predictable or unoriginal style, interests, or behavior. The term has been criticized as misogynistic, though it has been reclaimed, to some extent, by women who have been labeled basic bitches.

Where does basic bitch come from? 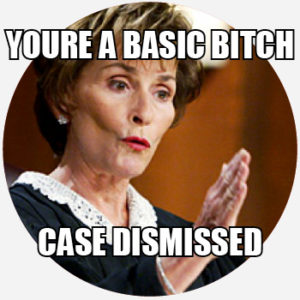 For many, the concept of a basic bitch is associated exclusively with middle-class white women, however, this term originated in black culture with a different meaning and connotations. The comedians Lil Duval and SpokenReasons popularized the term basic bitch in August 2009 with Lil Duval’s song “Basic Bitch” and SpokenReason’s explanatory-response video in which he rattles off various reasons why a woman might be a basic bitch. The reasons include having five children with five different men to finding his video offensive. At this time, basic bitch typically referred to a woman who thinks she is cooler, smarter, more independent, more mature, or more attractive than she really is.

The term basic bitch first appeared on Urban Dictionary soon after in August 2009. Its definition credited Lil Duval and SpokenReasons for bringing the term to the masses. In this entry, basic bitch is defined as “a bum-ass woman who think she the shit but really ain’t.” By 2011, with the release of Kreayshawn’s “Gucci Gucci,” basic bitch had come to refer more specifically to women who rely on popular designer clothing for status: “Gucci Gucci, Louis Louis, Fendi Fendi, Prada / Basic bitches wear that shit so I don’t even bother.” This definition of a basic bitch as a woman who likes things that are popular because they are popular began to stick.

The term became incorporated into a meme in 2012 with the upload of a popular Vine video that centered around it. Beginning around 2013, many blog posts and articles took on the task of identifying exactly what characterizes basic bitches: loving “Sex and the City,” wine coolers, selfies, leggings, UGGs, and pumpkin spice lattes. In 2014, Google lookups for basic bitch hit their all-time high. CollegeHumor posted a sketch titled, “How To Tell if You’re a Basic Bitch,” which portrayed a couple at a doctor’s office where the wife was diagnosed as being a basic bitch. The video has amassed more than 11 million views. Today, basic bitches are most commonly associated with pumpkin spice lattes and whiteness.

Basic bitch, now predominantly associated with white women, has been called out for being culturally appropriative by numerous writers who cite the term’s roots in black culture. Additionally, pushback against the derogatory use of the term basic bitch had been championed, mostly by women opinion writers, since the height of the term’s popularity.

For example, in 2014, Daisy Buchanan wrote for The Guardian that shaming a woman for liking stereotypically feminine things is not a feminist act. In her piece, titled “Why I’m proud to be a ‘basic bitch,’” she argues that it’s wrong to put down other women for being “normal” just to make you feel “special.” A 2015 blog post on BrazenHub further explained the term’s internalized misogyny: “‘Basic Bitch’ is a repackaging of the problematic phrase, ‘I’m/You’re not like the other girls.’” This has led to usage of the term by women to describe themselves as basic bitches, a slow reclaiming of the term.

This is not meant to be a formal definition of basic bitch like most terms we define on Dictionary.com, but is rather an informal word summary that hopefully touches upon the key aspects of the meaning and usage of basic bitch that will help our users expand their word mastery.