What does tankie mean?

A tankie is a leftist political insult for a communist who defends Stalinism or supports authoritarian or militaristic, anti-capitalist regimes.

Where does tankie come from? 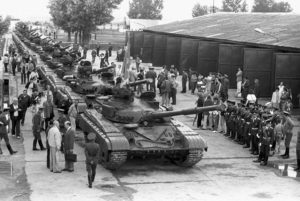 Tankie began as an insult for members of the Communist Party of Great Britain (CPGB), who supported the Soviet Union’s response to the Hungarian Revolution (1956) and the Prague Spring in Czechoslovakia (1968). Suffice to say, the Soviet response involved tanks. Thus the term tankie, which perhaps draws on earlier uses of tankie (or tanky) for a tank driver or a member of a tank unit. The term was recorded as early as 1983 in Marxism Today, the CPGB’s magazine from 1957–91.

Imagine being a tankie

Tankie spread in the 1980s as the Cold War dragged on. Though the Soviet Union dissolved in 1991, tankie stuck around, evolving as an insult for a Stalinist or Soviet apologist. I.e., a leftist who defends the aggressive and inhumane actions of the Soviet Union (especially under Joseph Stalin), like the famine-genocide in Ukraine 1932–33.

In the 2000s, tankie further spread in leftist internet slang as an insult for a militaristic anti-capitalist, as well as a term for performative Communism more generally.

I mean, remember – I became a full blown tankie like 3 hours ago; y'all are the ones who want to "keep capitalism" and compromise… not me.

Well, rich people are rushing to the table trying to get you to settle for a bad deal

This is not good enough; but it's a sign you'll win

If you tankies love Stalin so much WHY DON't You MARRY HIM HA!
@Reverend_Banjo, March 2019
At that point, we all loved Gramsci and Red Bologna, where the Italian Communist party held power: the fun kind of communism, not the “tankie” Stalinist kind.
Suzanne Moore, The Guardian, July 2018 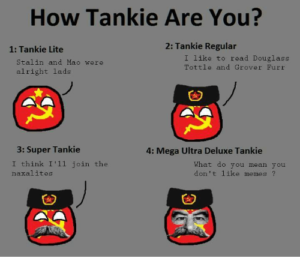 In leftist communities online, tankie is an insult for people seen as defending ruthless Communist authoritarians like Stalin.

If one more fucking tankie refers to the October Revolution as "the Bolshevik Revolution". fuck off you ahistorical, authoritarian arseholes

It can also attack such people for supporting militaristic Communism or opposition to the United States more generally.

I have upset the North Korea Tankie fan club. pic.twitter.com/PcuvPO9C6c

every time i think i'm gonna be farther towards the tankie side of things i get this same result 🥺 pic.twitter.com/bRI1aiu55g

This is not meant to be a formal definition of tankie like most terms we define on Dictionary.com, but is rather an informal word summary that hopefully touches upon the key aspects of the meaning and usage of tankie that will help our users expand their word mastery.