What does Ali bomaye mean?

Ali bomaye primarily refers to a chant rooting for Muhammad Ali in a historic boxing match. It means “Ali, kill him!” in a Bantu language.

Where does Ali bomaye come from? 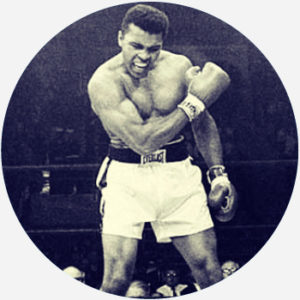 In 1974, Muhammad Ali boxed George Foreman in their historic and storied “Rumble in the Jungle” fight in what’s now the Democratic Republic of the Congo. Foreman, the undefeated heavyweight champion, was vastly favored to win, but Ali knocked him out with a crisp left-right combination during the eighth round.

During the fight, Ali’s many thousands of Congolese fans chanted “Ali, bomaye! Ali, bomaye!” Ali, of course, refers to the legendary boxer and bomaye means “kill him” in Lingala, a Bantu language of the Congo. The chant, equivalent to a kind of you-can-do it “finish him,” points to Ali’s beloved status in the Congo and as a heroic figure across Africa more generally.

The 1996 Academy Award winning documentary about the fight, When We Were Kings, features Ali bomaye. The 2001 film Ali also prominently includes the phrase in a climactic scene. As Ali (Will Smith) runs victorious through the Congo, we hear Ali bomaye chanted in the background and can see it in street art throughout the city. In 2009, Japanese wrestler Shinsuke Nakamura debuted a signature “finisher” move called the Bomaye, apparently in reference to Ali’s knockout. It involves a knee strike to his opponent’s head. In 2011, popular hip-hop artist The Game used Ali bomaye in his 2011 track, “Ali Bomaye.”

Thanks to the revered reputation of Muhammad Ali and the popularity of The Game, Ali bomaye is increasingly used as a kind of anthem for black strength or excellence, particularly when being discriminated against or when viewed as an underdog. Ali bomaye spiked upon Muhammad Ali’s death in 2016, used on social media as a memorial send-off to the important cultural and sporting figure.

Whenever I argue with racists, I picture stepping on their heads while The Game - Ali Bomaye plays in the background
@BigGucci_Idz, March, 2018
Muhammad Ali funeral - #powerful speech by pastor Cosby. Black struggle and triumph, but noting we are ALL human #AliBomaye #blackandpretty
@adsdiaspora, June, 2016
Inspired by the chant of “Ali, bomaye,” meaning “Ali, kill him,” from the cheering assembly of nearly 60,000 in the Stade du 20 Mai, boxing’s most controversial champion created the most bizarre chapter in his bizarre career in a bizarre bout in which each fighter earned $5 million in Africa’s first heavyweight title bout.
Dave Anderson, The New York Times, June, 2016
SEE MORE EXAMPLES

Ali bomaye is mainly used in speech and writing in direct reference to Muhammad Ali, his Rumble in the Jungle victory, Shinsuke Nakamura’s wrestling move, or The Game’s song.

Ali bomaye is occasionally used as an expression of pride and determination, typically by black men online, sometimes as a username.

This is not meant to be a formal definition of Ali bomaye like most terms we define on Dictionary.com, but is rather an informal word summary that hopefully touches upon the key aspects of the meaning and usage of Ali bomaye that will help our users expand their word mastery.