What does brujeria mean?

Where does brujería come from? 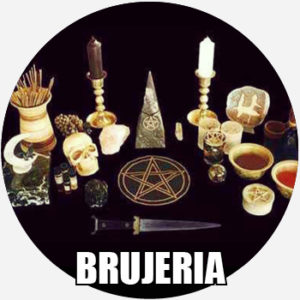 In Spanish, brujería names the craft practiced by a bruja (witch) or brujo (warlock). While their exact origins are unclear, bruja/o are traditionally derived from the Catalan bruxia, in use in the Middle Ages and whose roots may be Celtic or Iberian.

In the 19th century, brujería appears in English works describing contact between English speakers and Spanish speakers in Texas, Mexico, and the southwestern United States. In the 1838 novel Mexico Versus Texas, a Mexican soldier describes his enemy’s work as brujería. An anthropologist working for the Smithsonian Institution in 1888 noted that his Mexican interpreters referred to Apache ceremonies as brujería.

Anthropologists, sociologists, and even criminologists continued to comment on brujería in the 20th century. A law-enforcement primer on occult crime identified brujería as a mix of Catholicism, indigenous herbal lore, and European witchcraft that spread among Mexican Americans in the 1950s. A 1979 sociological paper explored brujería among Mexican Americans, suggesting the practice originally emerged in response to Catholic attempts to convert indigenous peoples.

In the early 21st century, some Latina and Black women have openly embraced the practice of brujería and the often stigmatized title of bruja. For example, Las Brujas, an online radio show on spiritual and “taboo” topics, has aired since 2015. In 2016, the rapper Princess Nokia released a song “Brujas” with lyrics about witchcraft and her Black, Native American, and Puerto Rican heritage.

Ok who ever did brujería on my life can stop now. I learned my lesson. Thanks.
@Chinohoven, February, 2018
I told my mom I think there’s a ghost in my house, and she said it was probably alguien que me está haciendo brujería #SalvadoranMoms
@ILikePupusas, February, 2018
[Brujería] is in our blood and must be activated for our empowerment and for the abolishment of the patriarchal rule. Reclaiming brujería is reclaiming our story and finding our voice as divine beings again.
Tatianna Morales quoted by Eda Yu, Broadly, January, 2018
SEE MORE EXAMPLES

While brujería was used in the past to denigrate certain practices, the term is now embraced by some Black and Latina women. Sometimes capitalized and written without an accent mark, brujería is used in both formal and informal speech and text, especially by Spanish-speaking people. The name, and practice, appeared in multiple popular films and TV shows, and a Mexican band called Brujeria has been playing hardcore metal since 1989.

In 2016, rapper Azealia Banks caused a stir when she posted a video of a floor covered in dry blood and chicken feathers, which she described as the result of “three years worth of brujeria.”

Additionally, bad luck is sometimes jokingly attributed to brujeria, often in the construction of someone doing brujería on another.

This is not meant to be a formal definition of brujería like most terms we define on Dictionary.com, but is rather an informal word summary that hopefully touches upon the key aspects of the meaning and usage of brujería that will help our users expand their word mastery.