What does cat tax mean?

A cat tax is a cute image or video of a cat posted online as a fun, ironic “fine” (tax) upon introduction to a forum or social media platform, for breaking an internet group rule, or just for fun. Meow!

Where does cat tax come from? 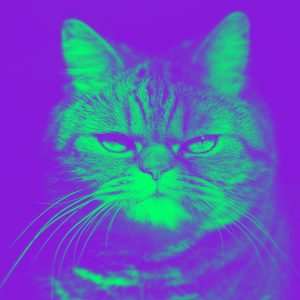 In internet culture, the expression cat tax apparently surfaced on the image-sharing website Imgur around 2015. The cat tax spread on other social media sites throughout the 2010s.

As the cat tax was explained on Reddit in 2015: “It’s a joke about how everyone wants to see pictures of cats. So if you post anything else you need to include a pic of a cat, as a tax.” This was considered especially true of people posting photo albums, making the cat tax a kind of incentive for viewing.

A cat tax is the playful activity of users need to “pay” for their activity with pictures or videos of cats. Consider the way someone may joke of charging a “tax” for a treat, as a parent to a child: I’ll buy you an ice cream, but I’m going to have to charge a taste tax (for a lick).

People posts cat tax images for a variety of reasons. Sometimes it’s as a way of introducing themselves to a new online community, sort of like “paying an entrance fee.” A cat tax can also be “levied” for internet behavior considered obnoxious, including breaking a rule on a message board, making a bad joke, or failing to post actively.

I just realized I hardly tweet anymore because I've been so busy so here's my cat tax. pic.twitter.com/pZ0kBFSHWP

Sometimes, people post pictures of kitties with the caption cat tax for fun. From LOLcats to Nyan Cat, Cat-related content, of course, is famously popular online; adding a cat tax image to your post may increase engagement.

The internet cat tax should not be confused with the way less adorable CAT tax. In the world of actual taxes (you know, the kind you pay with actual money), CAT stands for Capital Acquisitions Tax, which is a kind of gift or inheritance tax in Ireland. Back in Ohio, a CAT tax is a Commercial Activity Tax.

Since at least the 1890s, taxes on cat owners referred to as cat taxes have been proposed. Professional philosopher and provocateur Slavoj Žižek once argued for cat taxes on pet owners—as did the state of Connecticut in March 2019. A state law was proposed there to collect an adoption and annual licensing fee for cats, dogs, and other domestic animals, which critics called a cat tax. 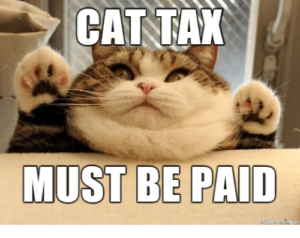 Internet cat taxes can be found throughout social media, especially Imgur, Twitter, and Instagram. Sometimes cat tax is found as a hashtag: #cattax. As noted, cat taxes can be a a good way to introduce yourself to a group, ensure engagement with your post, or make amends for posting something against the rules.

The notion of a cat tax is a joke. No one is going to audit you if you don’t pay your online cat tax. That’s why cat taxes are always tongue-in-cheek or ironic. Some folks find cat taxes cloying, too-cute kind of way … 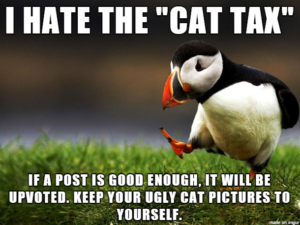 … the same cannot be said of the real-life CAT tax.

This is not meant to be a formal definition of cat tax like most terms we define on Dictionary.com, but is rather an informal word summary that hopefully touches upon the key aspects of the meaning and usage of cat tax that will help our users expand their word mastery.