Chrismahanukwanzakah is meant to be an inclusive celebration around December holidays for friends and family of diverse, interfaith backgrounds. It’s often used playfully, though, as a way to offset the dominance of Christmas in culture.

Where does Chrismahanukwanzakah come from? 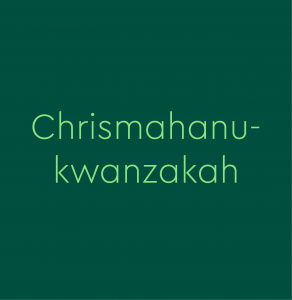 Before there was Chrismahanukwanzakah, there was Chrismukkah, a mixed celebration of Christmas and Hanukkah. Chrismukkah is often attributed to teen drama The O.C. in 2003, while a different blend, Hanumas, appeared on NPR’s Car Talk in 1998.

The concept of combining Christmas and Hanukkah, however, is far older. In the early 1900s, Weihnukkah was used by German Jews to refer to both Hanukkah and Weihnachten, a German term for Christmas Eve. In this sense, the term was meant to be ironic, as it referred to German Jews who had assimilated so much that they also celebrated Christmas.

Chrismahanukwanzakah adds in Kwanzaa, an African diaspora holiday created in the 1960s and celebrating African heritage in the Americas from December 26 to January 1.

...let's not get started with the peer pressure of Secret Santa gifts. What exactly can you get that guy in accounting for £5 that says "I care about you co-worker! Happy Chrismahanukwanzakah!"
Monica Parker, HuffPost, December 24, 2013
It's December 1st which means it's time to start decorating for Chrismahanukwanzakah!
@frillylilly, December 1, 2009
So in the spirit of Chrismahanukwanzakah, we thought it’d be charitable to round up a few of the best celebrity interiors we've seen this season—so far. From sky-high trees to frosty snowmen, it’s safe to say our fave VIPs didn’t disappoint on the festive front.
Caroline Biggs, Refinery29, December 27, 2016
SEE MORE EXAMPLES

Some people may observe an actual Chrismahanukwanzakah (occasionally also called HanuKwanzMas), getting together during the holidays with friends and loved ones from various backgrounds for an interfaith celebration.

Merry Chrismahanukwanzakah to all those of different beliefs that are on the east coast and to everyone else in a few hours! :)

Did you know we will have a total convergence of Hanukkah, Christmas and Kwanzaa this year? Happy Chrismahanukwanzakah! 😂 🎄🕎🎅🏿👲🏿

Goodmorning Winnipeg! Its like Chrismahanukwanzakah getting all these new bands on tour… @thelatency & @tkwc, welcome! See you all tonight

More often, however, Chrismahanukwanzakah has a humorous tone. It can be a fun way for diverse-minded individuals to lower the profile of Christmas in popular and consumer culture. It can also be a mocking way for less open-minded individuals to talk about multiculturalism, political correctness, and the so-called “War on Christmas.”

Because Virgin Mobile, however, used Chrismahanukwanzakah for sales, some complain the made-up holiday is a commercial ploy that diminishes the significance of each of the religious holidays.