What does Christmas creep mean?

Sure, we might call the Grinch or Scrooge literal Christmas creeps … but this term actually refers to that moment when Christmas music, decorations, and sales come earlier and earlier every year.

The annual appearance of Christmas merchandise in practically every store—which used to occur after Thanksgiving in the US—seems to creep up each holiday season.

Where does Christmas creep come from? 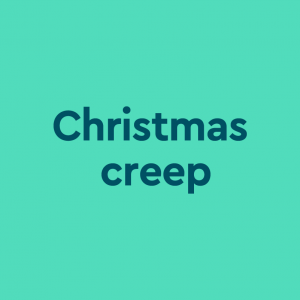 To retailers, Christmas might be a time of family, jingle bells, and roasted chestnuts, but it’s also about cold, hard cash. Enter Christmas creep, or the phrase that describes the fact that Christmas merchandise seems to end up on store shelves earlier and earlier each year.

Christmas creep has been a retailing trend since at least the 1950s, but the phrase emerged in the 1980s, as seen in an 1986 Los Angeles Times article: “Despite Santabear’s lovable nature, its September entrance is a symptom of what many view as an unfortunate trend: Christmas creep.”

Many publications have pointed out that Christmas creep worsened during the economic recession starting in 2008, when retailers had to fight in order to maintain the revenue gains usually obtained in the holiday season.

Offering layaway plans for gifts, free shipping, and deep discounts were all ways stores tried to grab consumer dollars—though they had to Christmas creep to do them.

We've had an increasing amount of Christmas creep ... It has accelerated during this Great Recession. Everyone is trying to get a leg up on everyone else.
David Brennan quoted by Suzanne Ziegler, StarTribune, November 25, 2009
Is it me or do people seem extra jazzed about Christmas creep this year? All the turkey stuff is out for Thanksgiving and that’s next week which is ... fine I guess but I definitely heard MJ’s I Saw Mommy Kissing Santa Claus today and was triggered.
@JoshundaSanders, November 13, 2018
Look at that. An army of chocolate Santas in Aldi. It is September 27. Don’t under any circumstances suggest that there’s a “War on Christmas”. If there’s a war (there isn’t), Christmas fired the first fifty shots with this Halloween-disrespecting Christmas-creep.
@meanderingtripe, September, 27, 2020
SEE MORE EXAMPLES

Christmas creep, whether in name or concept, is the subject of many satirical pieces in the media. Numerous cartoons are published on the topic from September to December each year as sleigh bells ring at Target. Christmas creep was notably mocked in a 1974 Charlie Brown animated special. 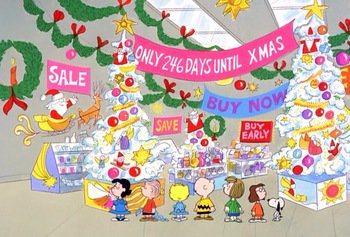 Whether they love Christmas creep or hate it, people enjoy calling it out when they see it. While the debate about Christmas creep usually starts in September, since this phenomenon knows no bounds, it sometimes starts to rage even earlier.

I resent "Fall creep"' the way most people hate "Christmas creep." No pumpkin spice lattes or Halloween stuff yet! It is still summer!

The Atlantic, Telegraph UK, and ABC News have all run articles trying to explain Christmas creep or to comment on particular marketing strategies companies are using … but no one can really shed light on solving the problem. Christmas creep is unstoppable.

This is not meant to be a formal definition of Christmas creep like most terms we define on Dictionary.com, but is rather an informal word summary that hopefully touches upon the key aspects of the meaning and usage of Christmas creep that will help our users expand their word mastery.