don’t tread on me

What does don’t tread on me mean?

Originating as a motto on an iconic Revolutionary War flag, don’t tread on me is a historic expression of American patriotism. Today, it may be used as a more general expression of personal freedom and individualism.

In the 2000s, the phrase became associated with a variety of libertarian, conservative, gun-rights, or far-right political groups as way to express their beliefs.

Where does don’t tread on me come from? 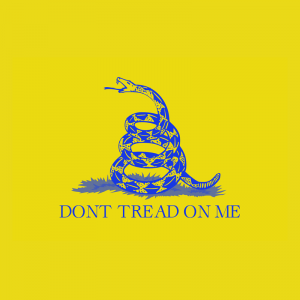 Don’t tread on me began on what’s known as the Gadsden flag, which features a rattlesnake coiled above the expression on a yellow background. The flag was first flown on a warship in 1775 as a battle cry for American independence from British rule. It’s credited to Christopher Gadsden, a soldier and politician from South Carolina. 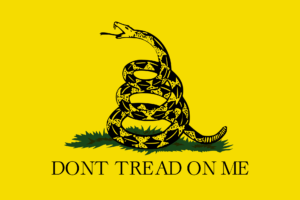 The snake was an established symbol for America at the time. Benjamin Franklin notably used it, saying the rattlesnake never backed down when provoked, which captured “the temper and conduct of America.”

The tread in Gadsden’s defiant phrase, don’t tread on me, means “to step, walk, or trample so as to press, crush, or injure something.” And so, with its tongue flicked, fangs out, and body coiled in defense, the rattlesnake (and motto) warns: “If you dare put your foot down on me, I will strike.”

In the 2000–10s, don’t tread on me—and the broader symbolism of Gadsden flag—became increasingly politicized. It was adopted by conservative and libertarian groups, including the Tea Party in 2009 in their platform for small government and lower taxes.

Because some supporters of these groups have been accused of racism, their critics view the flag and motto as an expression of bigotry. In 2014, for instance, a Black US federal employee felt discriminated against by a coworker who wore a hat with the Gadsden imagery. The employee wrote that Christopher Gadsden was a “slave trader & owner of slaves,” and that his flag had become a “historical indicator of white resentment against blacks stemming largely from the Tea Party.”

Examples of don’t tread on me

Good luck infringing our constitutional rights. #DontTreadOnMe
@taya_andresen, September 2019
So, like they say, don't tread on me. I'm happy. I don't need all the money in the world to be happy.
@MerryandMelody, September 2019
They were anti-regulation, pro small business, pro Second Amendment, suspicious of people on welfare, sensitive (in a ‘Don’t tread on me’ way) about any infringement whatsoever on their freedom.
George Saunders, The New Yorker, July 2016
SEE MORE EXAMPLES

Who uses don’t tread on me?

The different uses and associations of don’t tread on me has made the phrase a loaded expression in contemporary political discourse.

"Chris Pratt" “Don’t Tread On Me” reflects the basic principle of individual freedom; that people want to be left alone to live their own lives without outside interference. This is somehow very controversial in 2019 where you need to conform to the mob.

Many Americans—civilians, military personnel, liberals, and conservatives—may use don’t tread on me to express national pride or champion individual rights and freedom. They may also fly the Gadsden flag featuring the motto. The phrase may appear in a variety of other imagery or products, from tattoos to bumper stickers.

Happy Day!
That’s me holding a tool I use to castrate, in front of heavy equipment I drive, wearing a shirt of the female reproductive organ that says ‘don’t tread on me’. #WomensEqualityDay #AgHag #thisiswomenswork #rancHer pic.twitter.com/3RSJMVv5SZ

The phrase don’t tread on me is associated with a variety of official political groups, including the Libertarian Party and Tea Party. Members of these groups may use don’t tread on me (and the #donttreadonme on social media) to express their beliefs, especially about small government and taxation.

It’s also associated with gun-rights activists and supporters of a broad interpretation to the Second Amendment. They may use don’t tread on me in their opposition to gun control, which they perceive to be infringing on their constitutional rights.

We don't talk enough about the Tea Party as the major precursor/progenitor of the alt-right. I still see "Don't Tread on Me" plates everywhere, and we just don't talk about how that language and symbolism has directly contributed to the rehabilitation of fascism in America. https://t.co/1Ze959FBvd

Don’t tread on me is referenced elsewhere in culture, too. Metallica released a track in 1991 called “Don’t Tread on Me,” which prominently featured the phrase (and alluded to the Gadsden flag) in its lyrics:

Liberty or Death
What we so proudly hail
Once you provoke her
Rattling of her tail
Never begins it
Never, but once engaged
Never surrenders
Showing the fangs of rage
I sad, “Don’t tread on me”

In a 1995 episode of The Simpsons, Bart writes don’t tread on me on his rear end, which he flashes at angry Australians after he escapes punishment from their government.

In the 2010s, the Gadsden flag inspired many parody memes. One substituted a red Lego for the snake. (Because stepping on Lego, as many of us know so well, hurts!) Another, depicting a giant foot stepping on the rattlesnake, riffed on the motto: “I specifically requested the opposite of this.” The snek meme has also inspired some interpretations, such as “no step on snek.”

This is not meant to be a formal definition of don’t tread on me like most terms we define on Dictionary.com, but is rather an informal word summary that hopefully touches upon the key aspects of the meaning and usage of don’t tread on me that will help our users expand their word mastery.