What does existential crisis mean?

An existential crisis is a psychological episode in which a person questions the meaning of their life and of existence itself.

Where does existential crisis come from? 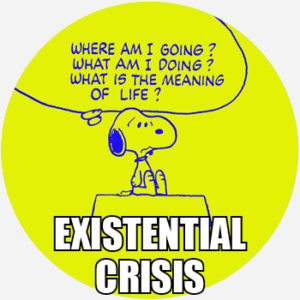 After the Holocaust and World War II, existential crisis saw growing usage in a more philosophical way, with the focus on individual people rather than a group facing an existential threat. Social scientists began to use the term in the 1950s to characterize internal conflicts of meaning and questions of one’s purpose and existence from a psychological and spiritual standpoint. Such crises obviously caused patient stress, anxiety, and depression, making it a topic that mental-health professionals worked to treat.

As existential crises are tied to abstract conflicts within the self, they are related to philosophy as a discipline. In fact, the term existential crisis has connections to existentialism, a branch of philosophy concerned with the nature of existence. It generally emphasizes a person’s position as a free agent in the universe.

Søren Kierkegaard is widely regarded as a father of existentialism. He theorized that the world isn’t in itself meaningful, but it is rather made meaningful by individuals living authentically. In his work, Kierkegaard frequently referred to the Existents–Forhold, Danish for “condition of existence.” Influenced by Kierkegaard, French philosopher Jean Paul Sartre helped popularize the term existentialism.

I had my first existential crisis when I was about 9 years old. I knew that life was meaningless, but postponed that inquiry.
James Kim, Quora, May 2015
I just realized I’m about to be the age my mom was when she gave birth to me hello existential crisis you’re right on time
@keenertaylor, February, 2018
You wait decades for an existential crisis, then two come along at once. At least that's how it must feel for OPEC's beleaguered ministers.
Julian Lee, Bloomberg, July, 2017
SEE MORE EXAMPLES

Though the term is often used as a term to pinpoint internal feelings, the label can be used to describe others too. For example, when others act erratically, some may question whether or not that person is having an existential crisis with the assumption that no other psychological event would cause them to act in such a way. In fact, celebrity Shia LaBeouf has admitted that he’s had an existential crisis, which he was forced to deal with after going through a series of embarrassing incidents in 2014.

The term has metaphorically extended to non-human agents as well. For example, Coke was said to be having an existential crisis when it juggled its brand as a soda with increasing health and market concerns over sugar.

This is not meant to be a formal definition of existential crisis like most terms we define on Dictionary.com, but is rather an informal word summary that hopefully touches upon the key aspects of the meaning and usage of existential crisis that will help our users expand their word mastery.