What does Four Loko mean?

Four Loko is a brand of caffeinated alcoholic beverage associated with binge-drinking. Its original recipe was discontinued over health and safety concerns.

Where does Four Loko come from? 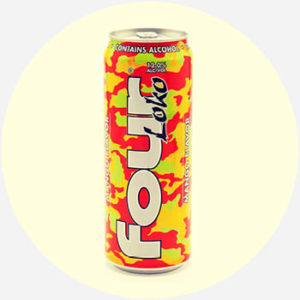 After its release in 2005, Four Loko gained notoriety as a college party drink that caused powerful intoxication. The brand’s name alludes to its high alcohol content. Four denotes that each beverage contains four standard drinks (about 56 grams of pure alcohol). Loko is apparently a marketing play on the Spanish word loco, slang for “crazy.” Their busy, brightly colored can design contributes to their “wild and crazy” brand identity, coupled with its marketing as an energy drink.

The drink was invented by a trio of fraternity brothers from Ohio State University. They were inspired by caffeinated mixed drinks like Vodka Redbull. Over the next several years, Four Loko became increasingly popular with young drinkers. The mixture of caffeine and alcohol that made Four Loko famous was ruled unsafe by the FDA in 2010, made yet more dangerous in binge-drinking contexts. High amounts of caffeine in the original recipe were known to mask the effects of intoxication, leading some young drinkers to push past their limits. Other concerns included the brand’s ostensible targeting of underage drinkers.

Despite changing its recipe to accommodate the ruling, Four Loko remains popular on college campuses, among other environments, with retailers sometimes claiming to sell the original Four Loko.

i’m drinking a four loko, i’m ready to make some bad decisions!!
@notnairobi, January, 2018
I wanna say something bad about the kids eating tide pods but I used to drink original four loko every weekend and i'm 90% sure it's mostly the same ingredients
@HerbMcDerb, January, 2018
No question Four Loko and other alcoholic energy drinks look cool and offer drinkers a buzz. But there are a whole lot of questions being raised about whether these kinds of products are safe and whether they are improperly marketed to young drinkers.
April Fulton, NPR, October, 2010
SEE MORE EXAMPLES

In popular culture, Four Loko is associated with extreme drunkenness, hangovers, and making bad decisions, once nicknamed “blackout in a can” and “liquid cocaine.” In 2010, President Barack Obama’s top drug advisor, Gil Kerlikowske, spoke out harshly against Four Loko, claiming its products are “designed, branded, and promoted to encourage binge drinking.”

The drink’s reputation has spawned several internet trends, including the “Four Loko Chug Challenge” on YouTube.

This is not meant to be a formal definition of Four Loko like most terms we define on Dictionary.com, but is rather an informal word summary that hopefully touches upon the key aspects of the meaning and usage of Four Loko that will help our users expand their word mastery.