What does Freakonomics mean?

Freakonomics is a best-selling book and hit radio program and podcast by economist Steven Levitt and journalist Stephen Dubner. It takes an accessible look at various social and behavioral phenomena through an economic lens.

Where does Freakonomics come from? 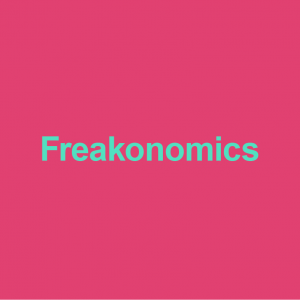 Freakonomics blends economics and freak. It’s an apt title for Steven Levitt and Stephen Dubner’s application of economic theories to seemingly unrelated sociocultural phenomena in their best-selling 2005 nonfiction book, Freakonomics: A Rogue Economist Explores the Hidden Side of Everything. In it, Levitt and Dubner use economic theories to analyze such unexpected topics as—and draw surprising and counterintuitive conclusions from—cheating in sumo wrestling, trends in and effects of naming patterns, and the relationship between crime reduction and legalized abortion.

Since their book, Dubner and Levitt have built a whole enterprise centered on Freakonomics. They launched a website in 2005, came out with a follow-up book, SuperFreakonomics in 2009, released a film adaption of their work in 2010, and started a popular radio program and podcast (Freakonomics Radio) in 2010. Popular episodes have centered on how people think more expensive wine tastes better and the power of bundling temptations with tasks (e.g., watching your favorite shows only when you work out).

Thanks to the success and popularity of the brand, offbeat analyses of sociocultural and economic topics in general have become synonymous with Freakonomics, as has the discipline of behavioral economics, a favorite of the Freakonomics team.

Tournaments have a place in economics. One of the insights popularised by Freakonomics back in 2005 was the idea that some jobs are tournament-like.

Dan McCrum, Financial Times, July 3, 2018
Because Silver’s father is a political scientist, it seemed natural that the bespectacled statistician would turn these Freakonomics-like sensibilities to elections, using the same data analysis that brought him success in baseball.
Matthew Cooper, Newsweek, July 18, 2016
Have you ever heard of the book Freakonomics? All data. I think you will find it enlightening
@daverhett, August 17, 2020
SEE MORE EXAMPLES

Freakonomics remains a popular source for economic discussion in popular culture (at least for the NPR-listening, Malcolm Gladwell-reading sort).

@thetruthcsgo You are interested in mainstream sport training, than you have to listen to Freakonomics's episode in praise of incrementalism

Basically a new age version of 'Freakonomics' with some interesting ideas and a different approach to behavioral economics.

'don't trust what people tell you; trust what they do.' #BookClub pic.twitter.com/iIBIXcuAa4

Freakonomics has drawn criticism, though, for its methods, conclusions, and topics.

Must read from @tomphilpott: Why @Freakonomics Is Wrong About Cantaloupes. Reflexive contrarianism at its silliest. http://t.co/P3ckMUVP

This is not meant to be a formal definition of Freakonomics like most terms we define on Dictionary.com, but is rather an informal word summary that hopefully touches upon the key aspects of the meaning and usage of Freakonomics that will help our users expand their word mastery.