What does Free Bird mean?

“Freeee Birrrrd! Play Free Bird!” Free Bird is a classic 1970s rock song by the band Lynyrd Skynyrd, known for its long length, for its epic guitar solos, and for people yelling out requests for the song at various live shows or events.

Where does Free Bird come from? 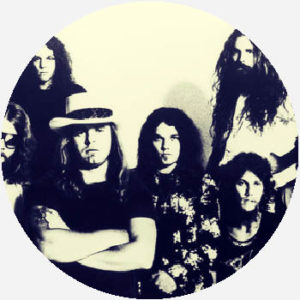 Southern rockers Lynyrd Skynyrd created a cultural phenomenon when they penned Free Bird in the early 1970s. As the story goes, guitarist Allen Collins wrote the initial chord progression but vocalist Ronnie Van Zant thought it was too complicated for a melody.

Too complicated, until Van Zant was struck with inspiration when he overheard Collins playing them when the band was recording their 1973 album and allegedly wrote the lyrics in under five minutes—almost half the length of the studio song, which clocks in at nine minutes. Live versions famously surpass 14 minutes.

The opening verse is believed to come from an argument between Allen Collins and his then-girlfriend, Kathy Johns. She had asked him, as the song puts it, “If I leave here tomorrow / Would you still remember me?” The two would eventually marry, with their fight living on in one of the greatest rock songs ever written. Indeed, Rolling Stone named it as one of the 500 greatest songs of all time.

Free Bird is the quintessential ballad for those who just can’t seem to settle down, a true rock-and-roll spirit reflected in the song’s hook (and epic double guitar solo during its sultry jam out): “But, if I stayed here with you, girl / Things just couldn’t be the same / Cause I’m as free as a bird now / And this bird you cannot change.” 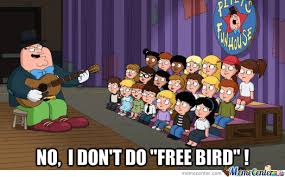 Free Bird has since become something of a real-life meme, with people jokingly shouting out for other bands to play Free Bird at live concerts. The origin of the tradition is unclear, though radio personality Kevin Matthews claims to have invented the chant to heckle bad singers at concerts in the 1980s. The tradition likely just started with fans of the song who’d cry out for it at Lynyrd Skynyrd shows, where the song makes for a perfect closer. 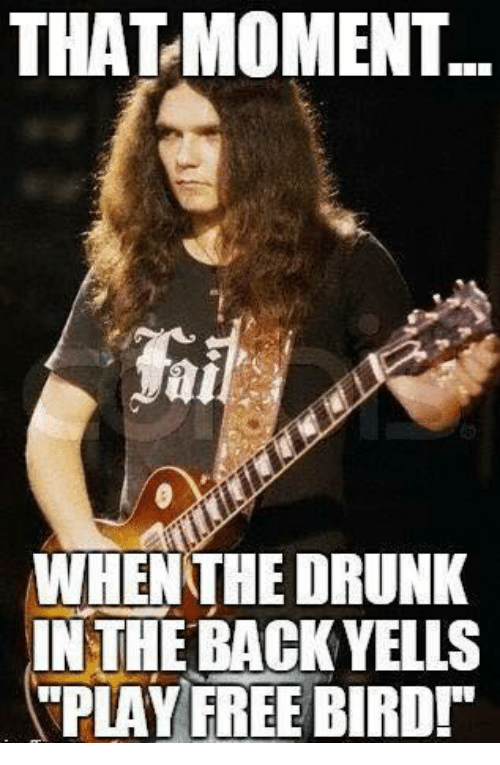 While many bands roll their eyes at newbie, ironic, or just plain drunk concertgoers’ clamors for Free Bird, some have cheekily embraced it. In the 1990s, the jam-band Phish performed a cappella versions of the song, including the guitar solos, and Nirvana once briefly riffed on “Sweet Home Alabama,” another Lynyrd Skynyrd staple, at a performance in response to a heckler. Yelling Free Bird has become such a tradition that some folks yell it out at live events that aren’t concerts, such as at speeches or ceremonies.

Morning routine: / 1. Play the air guitar to Free Bird / 2. That's it
@its_pondy, June, 2018
Woke myself up this morning screaming "PLAY FREE BIRD!!!" Turns out, my TV was on, and Lynyrd Skynyrd, was on @FoxAndFriends.
@airnashville, June, 2018
Bob Dylan performed a cover of Lynyrd Skynyrd’s ‘Free Bird’ at a gig in California last week...According to Rolling Stone, the legendary folk singer was responding to a request yelled by someone in the audience at the Berkeley show. He dutifully obliged, closing the set by jamming with his band to the southern rock classic.
New Musical Express, June, 2016
SEE MORE EXAMPLES

In popular culture, Free Bird sees three main uses: It’s hailed by fans as one of the greatest songs and guitar solos of all time, it’s lambasted by critics as a bloated and overrated ballad, and it’s crowed by people at concerts (or other live events) who think they are being clever but are really just being annoying.

I find it so strange how modern music doesn’t stick around it’s not timeless. There is no modern equivalent to Hotel California, Stairway to Heaven, Bohemian Rhapsody, Free Bird, Sweet Child O’ Mine and the list goes on and on

Yelling “do a kickflip!” at someone on a skateboard is the cringe equivalent of yelling “play free bird!” at a band on stage. CRAM IT.

This is not meant to be a formal definition of Free Bird like most terms we define on Dictionary.com, but is rather an informal word summary that hopefully touches upon the key aspects of the meaning and usage of Free Bird that will help our users expand their word mastery.