What does Wagon Wheel mean?

Though wagon wheel is literally the wheel of a wagon, it popularly refers to the hit 2004 song Wagon Wheel by alt-country string band Old Crow Medicine Show.

Where does Wagon Wheel come from? 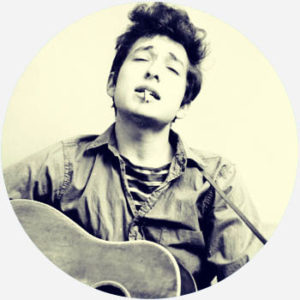 While the song Wagon Wheel has become a modern singalong, it has deep roots.

First, the term. A wagon wheel literally refers, of course, to the large, wooden wheels of a wagon. The phrase is found in Shakespeare by the 1590s. It lends its name to an optical illusion called the wagon-wheel effect, where spokes or propellers look like they are moving slowly, are standing still, or are rotating in the opposite direction.

Second, the music. Old Crow Medicine Show isn’t original in naming a song Wagon Wheel. “Wagon Wheels” was the title song for the 1934 Western movie of the same name.

Now, fast forward to 1970s. Bob Dylan scrapped a song he wrote working on his soundtrack for the 1973 film Pat Garrett and Billy the Kid. The draft, unofficially titled “Rock Me Mama,” nevertheless became a bootleg hit with his fans. 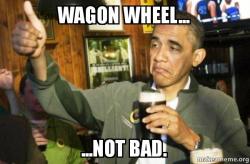 Some teenage admirers of Dylan at the time grew up and formed the band Old Crow Medicine Show. They took it upon themselves to finish “Rock Me Mama” and make it their own—splitting the royalties, of course. I mean, it’s Bob Dylan after all.

Old Crow released the song in 2004 as “Wagon Wheel,” telling the story of a man traveling the road from New England down to North Carolina to meet his lover. Old Crow frontman wrote verses based on Dylan’s original melody and chorus, which uses wagon wheel as a sexual metaphor: “So rock me mama like a wagon wheel / Rock me mama any way you feel.”

The song had its own wagon-wheel effect. It was a smash hit across the airwaves, bonfires, and late-night bars, gaining yet more popularity after English musician Nathan Carter covered it in 2012 (the Irish ate this version up) followed by a 2013 version by Darius Rucker.

Wagon Wheel will be a hit until the end of time.
@Call_Me_Hanky, June, 2018
drinkin great beer and listening to Wagon Wheel on the balcony, if I died right this second I'd be happy. #HeyyyyMamaRockMe
@mixtapetully, June, 2018
On 'Wagon Wheel,' Darius Rucker brings his signature sense of urgency to a modern classic that has been living just beneath the surface of mainstream success for nearly a decade.
Billy Dukes, Taste of Country, December, 2012
SEE MORE EXAMPLES

While an instant classic, Wagon Wheel occupies a divisive place in popular culture.

Many people know the words and love to sing along whenever it comes on (if they didn’t recommend the DJ play it at their cousin’s wedding). 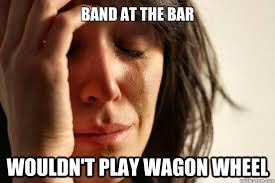 Others think the song is terribly unhip and overplayed, especially hated by guitar players who are called on to play the song around campfires. 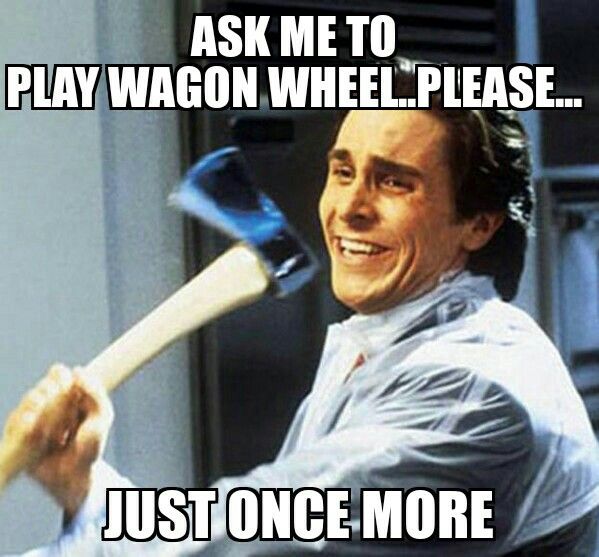 This is not meant to be a formal definition of Wagon Wheel like most terms we define on Dictionary.com, but is rather an informal word summary that hopefully touches upon the key aspects of the meaning and usage of Wagon Wheel that will help our users expand their word mastery.