What does Wakanda mean?

Wakanda is a fictional African country home to the Marvel Comics superhero the Black Panther.

The Black Panther was memorably portrayed by the late Chadwick Boseman in the hugely successful 2018 film adaptation of the same name. The movie Black Panther popularized a salute, known as Wakanda Forever, as a gesture of Black excellence around the world.

More Marvel words await in our slideshow, “10 Marvelous Words From The Marvel Universe.”

Where does Wakanda come from? 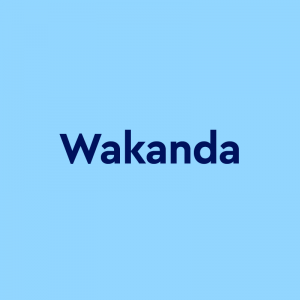 In the comic, the Fantastic Four are invited to the small, imaginary African country of Wakanda, which boasts incredibly advanced technology thanks to a powerful, fictional metal known as vibranium. King of Wakanda and with the real name of T’Challa, the superhero Black Panther defeats each member of the Fantastic Four using his physical and technological prowess.

Neither Stan Lee nor Jack Kirby, the creators of the Black Panther, provided a definitive origin for the name Wakanda. As explored in a March 2018 article by Peter Manseau for the Washington Post, one theory is that Wakanda is based on Wah’Kon’Tah, a mythical source of all goodness in the folklore of several Plains Indian tribes. Jack Kirby’s granddaughter, Jillian Kirby, supported the Post’s theory, stating that Jack Kirby was “well versed in religion and philosophy.”

.@plmanseau Great @washingtonpost article. My grandfather, Jack Kirby, self taught, well versed in religion and philosophy, researching his Western comics in the 50’s &60’s, predating #BlackPanther, no doubt would have encountered and understood the significance of #Wakanda. https://t.co/vlsHrikdR3

While Wakanda has been familiar to comic book fans since the 1960s, it earned worldwide prominence after the 2018 film Black Panther. In the film as in the comics, Wakanda is a hidden, isolated, but technologically advanced African country led and protected by the Black Panther.

Re-sharing my interview with #BlackPanther Production Designer Hannah Beachler where she talks about creating Wakanda, finding its place on the map, building the architecture and using various African traditions to inspire the technology: https://t.co/ouAX89nsI9#WakandaForever

The Black Panther film was extremely successful and popular as well as celebrated for its Black excellence, both in production and cultural impact. The fictional nation of Wakanda caught on with fans around the world, with Wakanda embraced as a powerful example of Afrofuturism.

In Black Panther and the broader Marvel cinematic universe, Wakandan characters issue a salute involving the arms crossed over the chest, often accompanied with a cry of “Wakanda Forever!” The Wakanda Forever salute spread into the broader culture as an expression of Black greatness and solidarity, thanks in large part to its use by Black athletes.

Got my first class ticket to Wakanda and I’m #BlackPanther ready 🖤💚❤️ pic.twitter.com/ozV0mrfhlH

Wakanda spiked in interest and use following the sudden death of Chadwick Boseman—the actor who played and, for many, become synonymous with the Black Panther—on August 28, 2020. Fans posted memorials and remembrances to Boseman using the Wakandan salute and honored him as the king of Wakanda.

Kids are paying tribute to Chadwick Boseman as Black Panther, posing with their action figures and doing the Wakanda Forever salute. 💔 https://t.co/gJv6PJs4Ui pic.twitter.com/L87lmQ2WWL

RIP to the king of WAKANDA! Wakanda FOREVER!!! pic.twitter.com/5zBHWT76zx

Wakanda is widely used in the context of the Black Panther across the character’s many iterations in the Marvel comic and cinematic universe. Wakanda is often used in connection to Black Panther actor Chadwick Boseman and frequently as part of the Wakanda Forever salute.

Aubameyang honored Chadwick Boseman with the Wakanda Forever celebration after his goal. pic.twitter.com/lIgQ44eR84

In the Marvel universe, a native of Wakanda is known as a Wakandan. Wakandan is also used as the adjective form of Wakanda.

This is not meant to be a formal definition of Wakanda like most terms we define on Dictionary.com, but is rather an informal word summary that hopefully touches upon the key aspects of the meaning and usage of Wakanda that will help our users expand their word mastery.