Beychella is a blend of superstar artist Beyoncé and the music festival Coachella.

It refers to Beyoncé’s historic, headlining performance at Coachella in 2018.

Where does Beychella come from? 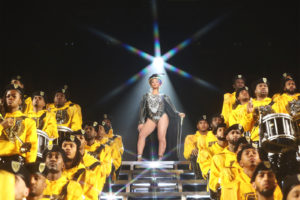 Nearly every year since 1999, the Coachella Valley Music and Arts Festival has been held at the Empire Polo Club in Indio, California. With its huge, star-powered lineups, the festival has become one of hottest, hippest musical festivals around the world.

Until 2018, Coachella had never had a black woman as a headliner. (To date, only four women have headlined Coachella: Björk twice, Lady Gaga, Beyoncé, and in 2019, Ariana Grande, whose performance some called Arichella.) That all changed when Beyoncé—who often goes by the nickname Queen Bey, pronounced [bee], not [bey]—took the stage in April 2018 with an epic performance incorporating a huge cast of dancers and musicians. 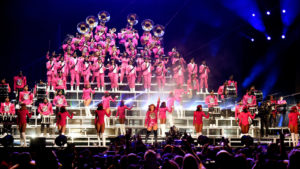 Queen Bey’s performance, spanning more than two hours, became one of the most watched Coachella performances on YouTube—and her fans, called the Bey Hive, dubbed it Beychella or #Beychella. Besides the spectacular show itself, Beyoncé’s set incorporated scores of references celebrating black culture, from the black feminism of Nina Simone to traditions of HBCUs, or historically black colleges and universities.

Beychella got a bump in April 2019 when Netflix released a documentary about Beyoncé’s Coachella performance, called Homecoming. Unlike YouTube clips, Homecoming allowed people who were not so privileged to attend the original event to see Beychella in its full glory.

No artist can beat #Beychella #Homecoming ONLY THE QUEEN BEY!!!!!! pic.twitter.com/dJgsMCz07d

Every day I am beyond grateful I got to go to Beychella. An experience I will remember for the rest of my life. 😭😭
@OfficialVaughnX, April, 2019
Eight months of rehearsal went into making Beychella happen. And Bey, wearing a Howard sweatshirt, no makeup and toting her children around, was at the head of it all.
Ellen Johnson, Paste, April, 2019

Beychella most often refers to Beyoncé’s performance at Coachella in 2018. Some may use Beychella for Coachella itself—the implication being that she’s such a queen, the festival might as well be named after her!

The hashtag “#Beychella” is also found on social media to tag people’s thoughts and feelings about the performance and the Netflix documentary Homecoming—or when trying to mimic its choreography. Sometimes the documentary itself is referred to as Beychella.

Beychella is often paired with the honeybee emoji, 🐝, a reference to Beyoncé as Queen Bey.

6th time 🐝💛 #Beychella #HOMECOMING (I’m trying to learn at least some of the choreography 😂) pic.twitter.com/YbuhsxeLn1

This is not meant to be a formal definition of Beychella like most terms we define on Dictionary.com, but is rather an informal word summary that hopefully touches upon the key aspects of the meaning and usage of Beychella that will help our users expand their word mastery.