Black Twitter is a word to describe the collective identity of black users on Twitter. In a sense, Black Twitter is a digital community that allows people to connect and bond over what it means to be black. This includes both the lighthearted and grim aspects. The focus tends to be reflective of African Americans’ experience, though not exclusively. 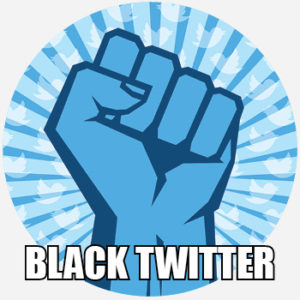 Black Twitter has existed in the sense of referring to a black community on Twitter since at least 2008. It existed somewhat quietly until about 2010, when people began to report on it. By March 2013, it became a bigger topic of discussion, and more people became aware of its existence. Since then, it has remained an important space on social media.

Perhaps a defining moment for Black Twitter was the controversy surrounding Trayvon Martin’s death in February 2012 and George Zimmerman’s subsequent acquittal in July 2013. Understandably, Black Twitter was indignant, and played a fundamental role in spreading the hashtag #blacklivesmatter, which evolved into a full-blown political movement in the following years.

I LOVE SEEING BLACK PEOPLE GRADUATE!!!!!!! KEEP THE GRAD PICS COMING!!! KEEP PROSPERING!!!! BLACK TWITTER ROOTING FOR Y'ALL FAM!!!
@tolu_augustinee, May 11, 2017
Black Twitter has the potential to diversify the way we approach traditional news reporting and to influence which stories relevant to people of color receive adequate national coverage.
Stacia L. Brown, “Why Black Twitter Is Bigger Than Any One Story,” Rolling Stone, July 16, 2015
The luminaries of Black Twitter never hesitate to roast those who deserve it. They burned Steve Harvey to a crisp for his Miss Universe fail. They clap back when their auntie is rude during the holidays. But now the roast has taken on a more literal dimension.
Gabe Bergado, “Black Twitter list the woke white people invited to their cookout,” The Daily Dot, March 3, 2016
SEE MORE EXAMPLES

People often mention how multi-purpose Black Twitter seems to be. The community offers a supportive culture where members can discuss topics such as institutionalized racism, problematic people, racist messaging, as well as lighter topics like pop culture, movies, and memes. Perhaps most importantly, it offers immersion in a black community where one’s concerns or perspectives are validated.

Black Twitter is all about community engagement. This usually involves small actions such as retweeting to indicate interest in a conversation or responding to others’ tweets. It’s validating to not be alone in one’s concerns or experiences. There’s also a lot of diversity in interests and topics covered, which is important to note, as Black Twitter is a reflection of the community that forms it.

Black Twitter is especially known for its role in the creation of the Black Lives Matter movement, as well as other hashtags, such as #icantbreathe, #sayhername, #bringbackourgirls, and #blackgirlmagic. Black Lives Matter is one of the more well-known causes that Black Twitter champions, and it’s certainly been a powerful vehicle on the path to exacting racial equality.

This is not meant to be a formal definition of Black Twitter like most terms we define on Dictionary.com, but is rather an informal word summary that hopefully touches upon the key aspects of the meaning and usage of Black Twitter that will help our users expand their word mastery.