Who is Kunta Kinte?

Kunta Kinte is a fictional African slave taken to 18th-century America in the novel and adapted TV series Roots.

Where does Kunta Kinte come from? 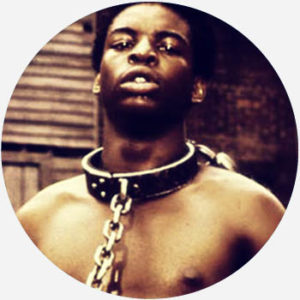 Kunta Kinte is a protagonist in Alex Haley’s novel Roots: The Saga of an American Family. Written in 1976, Haley’s novel follows Kunta Kinte from his capture by white slavers in Gambia to his life as a slave in the United States. Notable events in Kunta Kinte’s life are his slave-naming as “Toby,” which becomes a great struggle between him and his white master, and the amputations of half of his foot as punishment for an escape attempt. Kunta Kinte’s daughter, Kizzy, later succeeds her father as the novel’s main character.

Alex Haley claims that Kunta Kinte was a real person, and that he is Kunta Kinte’s great-great-great-great grandson. After genealogists found discrepancies between Haley’s assertions and the known historical facts regarding the person purported to be the real Kunta Kinte, Haley said that he also took inspiration and some material from The African, a book by Harold Courlander.

The popularity of Haley’s novel led to the production of Roots, a TV miniseries in 1977. In this series, Kunta Kinte is portrayed by LeVar Burton and, as an adult, John Amos; in the 2016 remake, he is played by Malachi Kirby. Roots proved to be incredibly popular, with over 110-million viewers, and it has become an iconic piece of historical and African-American fiction.

As a well-known character, Kunta Kinte has since been used as a slur for African people, particularly those who have recently emigrated, alluding to Kunta Kinte’s arrival in North America after his kidnap from Africa.

However, as inspired by the character, rapper Kendrick Lamar’s 2015 song “King Kunta” is an anthem of black excellence and strength.

ALEX JUST SAID JB COULD CALL HER KUNTA KINTE WHILE HES SMASHING
@changkyunsgfg, November 2018
[Uncle Phil just grounded Will and took away all of his privileges] Will: Why don't you just do me like Kunta Kinte and cut off my foot?
Will Smith, Fresh Prince of Bel Air, 1991
Kunta Kinte's obstinance, even while under the whip, is the most powerful scene in ‘Roots,’ the television miniseries that enthralled the nation in 1977. And that same scene may be even more powerful in the remake being shown on the History Channel Memorial Day. Malachi Kirby stars as the kidnapped Mandinka warrior.
Jarvis DeBerry, The Times-Picayune, May, 2016
SEE MORE EXAMPLES

Kunta Kinte is widely recognized in African-American culture as well as mainstream American culture, and the name is emblematic of the historical conversation around slavery in the United States. His name is used in discussions of literature, film, TV, and as an informal reference in casual conversation. The amputation of his foot as an impediment to his escape is particularly noted.

As a slur, Kunta Kinte is used by bigots to characterize an African person, especially if they are a recent emigrant. British soap-opera Coronation Street notably drew fire in 2016 for racism after a character referenced Kunta Kinte when joking about the roots of hair.

However, Kunta Kinte has also been claimed by African-Americans as a positive, empowering figure. Kunta Kinte memes humorously compare African-American culture to the antebellum setting of the novel and miniseries, especially repeating the famous line “Your name is Toby!” when a white master tries in vain to force Kunta Kinte to acknowledge his slave name.

This is not meant to be a formal definition of Kunta Kinte like most terms we define on Dictionary.com, but is rather an informal word summary that hopefully touches upon the key aspects of the meaning and usage of Kunta Kinte that will help our users expand their word mastery.