Who is Laughing Jack?

Laughing Jack is a character in the online horror fiction genre, creepypasta. He is an evil clown who becomes “imaginary friends” with his child victims before brutally killing them.

Where does Laughing Jack come from? 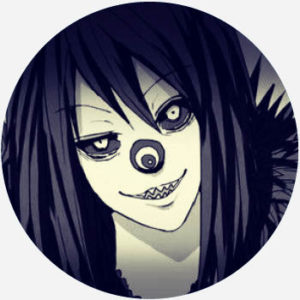 The story of Laughing Jack was first posted on a popular online social community for artists, DeviantArt, by user SnuffBomb on March 3, 2013. In the post, SnuffBomb told the story of a five-year-old boy named James, who shares stories of his encounters with Laughing Jack with his mother, who she takes as an imaginary friend. He describes Laughing Jack as a clown with “long hair and a big swirly cone nose. He’s got long arms and baggy pants, with stripy socks, and he always smiles.”

The original story is told from the first-person perspective of James’s mother, who assume her son’s relationship with the imaginary friend is just a phase until she begins to experience nightmares full of eerie carnival imagery, including stuffed animals hanging from nooses, empty circus tents, mutilated children, and, most importantly, the sound of the song “Pop Goes the Weasel” coming from a jack-in-the-box somewhere in the rundown amusement park. Strange things happen around the house, which James always attributes to Laughing Jack, to his mother’s increasing suspicion and fear. When they awake to find their dog dead and hanging in the kitchen one night, the police arrive and tell them that whoever killed the dog must have already been inside the house. The next night, the mother hears the nightmarish laughter from her previous dreams coming from James’s room, and enters to find him nailed to his bedroom wall, chest sliced open and organs hanging out. Suddenly, Laughing Jack appears in front of him. In an effort to kill Laughing Jack, the mother lunges forward with a knife, but ends up stabbing her own son to death while Laughing Jack disappears. She is later arrested and tried for insanity.

The story of Laughing Jack was so successful online that user SnuffBomb posted an origin story for the monster in December 2013. The new story reveals that Laughing Jack’s first playmate is a poor young boy named Isaac in Victorian England, who receives a “laughing jack-in-the-box” as a Christmas gift. According to this account, Laughing Jack began as a good-natured toy to keep lonely children company, although he does not allow Isaac to show him to his parents. Because his parents cannot see Laughing Jack, Isaac is blamed and punished for the pair’s playtime antics, which Jack takes too far, like killing a neighbor’s cat while they are pretending to be pirates. Isaac is eventually sent to boarding school as a result. In his friend’s absence, Laughing Jack grows disillusioned and hollow, until Isaac finally returns to his childhood home as a grown man. Scarred from his traumatic treatment as a child and, by implication, at boarding school, Isaac is now a violent and brutal man. Laughing Jack witnesses his old friend viciously assault and murder a number of victims, disposing of their bodies in creative ways, and becomes fascinated and eventually delighted by what he perceives as Isaac’s “new game,” thus explaining where his sadistic taste for murdering children came from.

In November 2015, a 12-year-old Indiana girl, later diagnosed with mental illness, killed her stepmother, reporting to authorities Laughing Jack told her to do it. The previous year, two teens were charged with viciously stabbing a peer to death to please another creepypasta character, Slender Man.

“When I found out that @Corpse_Husband talked about my story/character Laughing Jack: When I found out It was because of the murder: ”
@TheSnuffBomb Twitter (April 14, 2017)
“Laughing Jack is cool and all but yeah I'm deff for Jeff”
@Precious_Dazai Twitter (March 20, 2017)
“A 12-year-old Indiana girl who fatally stabbed her stepmother said an online horror story clown named ‘Laughing Jack’ told her to do it, according to reports.”
Tobias Salinger, “Indiana girl, 12, killed stepmother because creepy clown character ‘Laughing Jack’ told her to do it: reports,” The New York Daily News (November 19, 2015)
SEE MORE EXAMPLES

This is not meant to be a formal definition of Laughing Jack like most terms we define on Dictionary.com, but is rather an informal word summary that hopefully touches upon the key aspects of the meaning and usage of Laughing Jack that will help our users expand their word mastery.