In the Teenage Mutant Ninja Turtles franchise, Krang is an evil supervillain in the form of a gelatinous, tentacled brain. Deprived of a body, he achieves mobility through the use of an android body or other device.

Krang is also sometimes a slang nickname for weed.

Where does Krang come from? 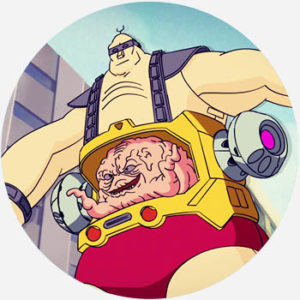 Krang first appeared in the second episode of the cartoon TV series Teenage Mutant Ninja Turtles (TMNT) in 1987. Voiced by Pat Fraley, Krang became a regular villain in the show, spanning its run to 1996.

Created by David Wise, the show was inspired by the original comic-book series of the same name, which was on its third year when the show aired. Eager to introduce TMNT to a wider audience, Wise included the comic’s original villain, Shredder, but also created a new alien enemy, Krang, to draw more eyes to the screen. Krang’s octopus-brain appearance was significantly influenced by squishy brain-alien characters called Utroms in the comics. Wise admitted in an interview that, aside from novelty, the prime reason for introducing the non-human villain Krang was to provide a platform for dramatic Japanese-style fighting without blood or gore.

The details of Krang’s backstory are hotly debated and often conflated on TV shows, films, comic-book series, video games, and other iterations of the TMNT franchise. Most agree Krang was a tyrannical leader on the planet Utrominon, located in a militant constellation of galaxies called Dimension X. After his banishment to Earth, Krang teamed up with Shredder, and the two became the Turtles’ main adversaries.

Krang most frequently appeared in an android body suit built by Shredder. With a brain-sized module carved into its torso which Krang could command, the android suit possessed shape-shifting arms that could swell to magnificent size and transform into a variety of weapons.

The original TMNT cartoon inspired spinoffs and merchandise in the 1990s onward, with Krang usually among them and making him a notable villain in popular culture. Animated series airing in 2003–09 and 2012–17 made the show popular for 21st-century youth as well. In 2012, Nickelodeon’s animated TV offshoot of TMNT introduced a group of very familiar-looking aliens called the Kraang—an obvious tribute to Krang. Krang even made a cameo in Season 4 of the show.

The biggest spike in Krang’s search history was in 2016, the year the supervillain appeared in slick, gooey, live-action form for the first time in Teenage Mutant Ninja Turtles: Out of the Shadows.

Evidenced in drug slang since 2007, Krang has also nicknamed cannabis, ostensibly based on the likeness between a certain top-heavy type of marijuana plant and the TMNT character, not to mention the “heady” effects of the substance. The slang appears to have had peaked in 2014.

Everybody's stomach looks like Krang!
@swearimnotpaul, April, 2018
Never underestimate who you fighting…Krang was a blob of flesh and still gave the ninja turtles the business.
@bigpimpinET, December, 2012
No matter who is in charge, I will go see a Ninja Turtles movie if it has Bebop, Rocksteady, and Krang. Anyone with the guts to put a talking brain in a robot’s tummy in a multimillion dollar blockbuster movie deserves my ten bucks.
foolsgold64, Reddit, 2015
SEE MORE EXAMPLES

Krang is well-known to people, especially males, who grew up on the original TMNT as well as younger children who have watched its many reboots throughout popular media. Some people even muse about what the TMNTs would say about Krang if they could text: 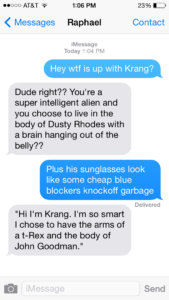 Social-media references may reminisce on Krang or compare his appearance to things in real life that jog memories of him (e.g., pale, goopy dumplings or a person who likes like Krang when he’s body-suited).

In internet culture, Krang is associated with Krang T. Nelson, who speaks out against Trumpism and the alt-right to over 150,000 followers. His thumbnail usually features some version of his apparent namesake, Krang.

This is not meant to be a formal definition of Krang like most terms we define on Dictionary.com, but is rather an informal word summary that hopefully touches upon the key aspects of the meaning and usage of Krang that will help our users expand their word mastery.