Who is the Kool-Aid Man?

Kool-Aid Man is a anthropomorphic pitcher of bright red Kool-Aid who serves as the mascot for the powdered drink-mix brand. The character is known for his audacious entrances and catchphrase “Oh, yeah!”

Where does Kool-Aid Man come from? 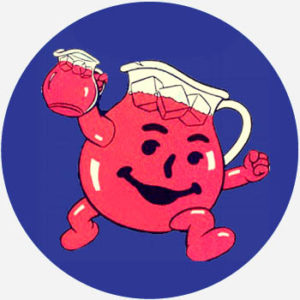 Kool-Aid, a brand of powdered drink now owned by Kraft Foods, was developed in 1927 by inventor Edwin Perkins. The word Kool is a variation of cool and aid of the suffix -ade, as in lemonade or Gatorade.

The Kool-Aid Man’s first iteration was as the Pitcher Man in a 1950s advertising campaign as pitcher of Kool-Aid with a smiley face. By the mid-1970s, Kool-Aid Man had evolved into a life-sized anthropomorphic character who became famous for his destructive antics. Over the following decades, dozens of popular television advertisements featured Kool-Aid Man. He became well known for abruptly bursting through brick walls to share Kool-Aid with awe-inspired children. In the 1980s, he even inspired a (short-lived) video game and comic-book series.

Kool-Aid Man’s outsized appearance and dramatic entrances have made him a noted marketing and popular cultural figure. The character has been parodied by numerous television shows, including Family Guy and The Simpsons. Comedian Dane Cook memorably lampooned the Kool-Aid Man character in his 2003 debut comedy album Harmful If Swallowed. In his routine, Cook recalls the Kool-Aid Man as nightmarish and criticizes the children in Kool-Aid commercials, who would “drink out of him after debris fell in his open, dumb head.”

Hey girl, let’s put red food coloring in the bathtub and pretend we’re trapped inside the Kool-Aid Man.
@Staggfilms, February, 2018
Sorry if I appear distant and reluctant to conversate lately, haven't been interacting with people off and online regularly and it's showing. Also, my anxiety likes to come in crashing like the Kool-Aid Man when I do start speaking…
@VIVAjase, February, 2018
The iconic Kool-Aid Man—while contemporary to famous icons like Smokey the Bear, Tony the Tiger and Lucky the Leprechaun—has always been one of the most literal ad icons. He didn't just represent the product, he was the product.
Rupal Parekh, AdAge, April, 2013
SEE MORE EXAMPLES

References to Kool-Aid Man are usually accompanied by his catchphrase, “Oh, yeah!”

The character is often alluded to when describing literal and figurative acts of crashing in or through something.

This is not meant to be a formal definition of Kool-Aid Man like most terms we define on Dictionary.com, but is rather an informal word summary that hopefully touches upon the key aspects of the meaning and usage of Kool-Aid Man that will help our users expand their word mastery.