Ready to get down—and realize your full potential? Funkentelechy is a 1977 song by funk band Parliament from their album Funkentelechy vs. the Placebo Syndrome. The playful coinage means “realizing one’s potential funkiness.”

Where does Funkentelechy come from? 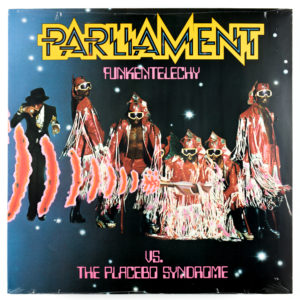 Funk band Parliament released Funkentelechy Vs. the Placebo Syndrome in 1977, which featured the 10-minute-plus track “Funkentelechy.”

The word Funkentelechy is a blend of “funk,” a genre of music that originated from Black communities in the 1960s influenced by jazz and soul, and entelechy. Entelechy is a Greek philosophical concept of “realization or actuality as opposed to a potentiality,” aka “being real.”

For Parliament, entelechy could be achieved through the down-to-earth-ness of funk. So, Funkentelechy is like “realizing one’s potential funkiness,” especially in the face of the Placebo Syndrome, which Parliament imagined as the mind-controlling forces of consumerism.

In 1978, Rolling Stone praised Funkentelechy vs. the Placebo Syndrome as a “funk opera.” The track and album continue to influence artists today—and still gets people on the dance floor.

“Funkentelechy vs The Placebo Syndrome” is not just the best workout music, it’s the most overlooked rock opera of the rock-opera era and the most deserving of a Broadway-musical treatment ...
@DougSaunders, May 2019
Thank you Uncle @george_clinton for flashing your light and helping an unfunky obsolete and out of time sucka like me find his funkentelechy, for I had dropped that mutha on the flo' in the dark and knew not where to find it. I'll never be too cool to dance.
@slaughter_won, April 2019
"Funkentelechy" is a ferocious musical workout, layers of horns that glow over the deep rumbling of Bootsy Collin's pulsating bass, more hand than instrument, reaching through the speaker, fully endowed with "the Pleasure Principle," to shake listeners out of whatever funk they might be in by letting them listen to the kind of funk they could be in.
Gregg Lipkin, PopMatters, February 2010
SEE MORE EXAMPLES

References to Funkentelechy are typically about the personal, cultural, and musical influence of the song and album.

Funkentelechy is also discussed in reference to Parliament’s anti-consumerist themes and aesthetic of Afrofuturism.

Occasionally, Parliament and funk aficionados use Funkentelechy in the spirit of the song, i.e., realizing one’s potential.

This is not meant to be a formal definition of Funkentelechy like most terms we define on Dictionary.com, but is rather an informal word summary that hopefully touches upon the key aspects of the meaning and usage of Funkentelechy that will help our users expand their word mastery.