or Attention in Delay of Gratification [mahrsh-mel-oh test]

What does Marshmallow Test mean?

The Marshmallow Test is a famous psychological test performed on young children in the 1960s linking delayed gratification (a treat right now...or two later?) to success later in life.

A 2018 replication notably concluded, though, that socioeconomic background significantly influenced the ability of children to delay their gratification. So ... the test was biased.

Where does Marshmallow Test come from? 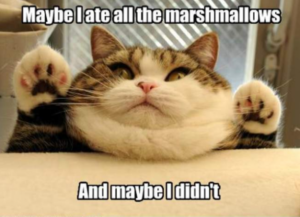 The Marshmallow Test was first administered by psychologist Walter Mischel at Stanford University’s Bing Nursery School in 1960. To study the development of self-control and patience in young children, Mischel devised an experiment, “Attention in Delay of Gratification,” popularly called the Marshmallow Test by the 1990s.

The test placed a choice before children. They could eat a treat—often in the form of a marshmallow but also a pretzel or cookie—before them right away or get two treats if they waited 15 minutes, during which time the experimenter would leave the room and observe.

Some kids ate the marshmallow right away, others couldn’t make it the full waiting period, and about a third earned that second treat. The study showed children hiding their faces, squirming, or engaging in make-believe to help them cope with the temptation.

The Marshmallow Test gained greater recognition after Mischel followed up on his subjects in the 1980–90s, where he found that children who earned the second treat scored significantly higher on their SATs than their counterparts and avoided problems like drug addiction and jail time at greater rates.

Mischel wrote up his research for general audiences in his 2014 book Marshmallow Test, which championed self-control as the key to success.

Sound too good to be true?

Well, in a study published in 2018, researchers Tyler Watts, Greg Duncan, and Hoanan Quan replicated the Marshmallow Test. They found a strong correlation between a child’s socioeconomic status and their early ability to resist the marshmallow.

Their results suggest that the original experiment failed to take into account outside factors such as family background and home environment, with poorer children perhaps less motivated to wait due to the uncertainties and challenges of their everyday lives.

I also recognize that each "replication crisis" story is different from one another. Like, what happened recently with the marshmallow test, i think, is a nice example of how more data can paint a conclusion in a new light (and that mischel et al weren't wrong perse).

The Marshmallow Test comes up in discussions of popular psychology and economics, such as on Freakonomics or in high school or college courses. Sometimes, it’s the subject of humorous observations about adult temptations.

Since 2018, the Marshmallow Test has come under scrutiny for the overpromises or oversights of experiments in social science, including the so-called “replication crisis,” where the results of major and influential studies have been found impossible to replicate.

The marshmallow test is one of the most well-known studies in all of psychology, but a new replication suggests we've been learning the wrong lesson from its findings for decades: https://t.co/sHUrzPXVZO pic.twitter.com/dIz8gBEMIx

I'm not even 100% sure I'd be able to pass the marshmallow test as an adult.

This is not meant to be a formal definition of Marshmallow Test like most terms we define on Dictionary.com, but is rather an informal word summary that hopefully touches upon the key aspects of the meaning and usage of Marshmallow Test that will help our users expand their word mastery.