Feedback
It's Everyday Bro
Jenny from the Block

or Jagerbomb or Jägerbomb [yey-ger bom]

What does Jager bomb mean?

A Jager bomb is a cocktail prepared by dropping a shot of Jägermeister into a pint glass full of an energy drink, traditionally Red Bull.

Where does Jager bomb come from? 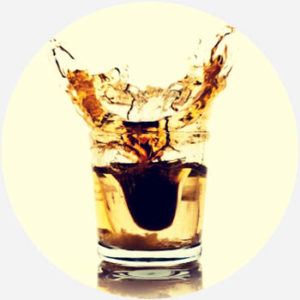 Jägermeister has been produced in Germany since 1934 and sold in the United States since New York importer Sidney Frank ordered 2,400 bottles in 1975. An herbal liqueur made from “56 different herbs, blossoms, roots and fruits from around the world,” according to the company website, Jägermeister is popularly thought of as too strong to sip on its own. Instead, Jägermeister is far more commonly consumed (outside of Germany) in a cocktail.

Though many drinks are made with Jägermeister, Jager bombs are among the most popular. Jager bomb is an open compound of Jager, short for Jägermeister, and bomb, referring to the way the shot of Jägermeister is dropped into the beer mug of Red Bull (a so-called bomb shot). Though the exact origin of Jager bombs is unknown, they were emerging by 2003 in restaurant-industry publications and on bartending websites. The original Jager bomb is widely believed to have been made with beer instead of an energy drink, but by the drink’s popularization in the early 2000s, the mix of Red Bull and Jägermeister had become standard.

Bartenders often prepare Jager bombs for large group orders in a “jager train,” lining pint glasses full of Red Bull up on the bar and balancing shot glasses of Jägermeister on top of them before toppling them over into their respective glasses.

...So you completely disappeared from my memory last night at about my 15th Jager bomb. But only you. No one else.
@TFLN, January, 2018
That was before the humans decided to create the Jaeger program. (Not to be confused with the Jägerbomb. Fighting gigantic monsters would be hard with one of those.)
Esther Zuckerman, The Atlantic, May, 2013
Angel: "What have you done to this duck" God: "I GAVE IT STEROIDS AND METH" Angel: "WHY" God: "I CALL IT A GOOSE" Angel: "WHY IS IT SCREAMING AT ME" God: *downing another jager bomb* "FUCK YOU"
@TechnicallyRon, January, 2018
SEE MORE EXAMPLES

In popular media and conversation, Jager bombs are often associated with college-aged binge-drinking and reckless partying in both humorous and serious contexts. The Jager bomb is the drink many young people associate with the wildest nights, sometimes referring to being wasted as being Jagerbombed even if they got drunk off some other drink.

Because of their hardcore partying reputation, Jager bombs were often referenced by late-2000s, Jersey Shore-era, New Jersey bros, or “guidos.” This usage was featured in the “My New Haircut” series posted on YouTube by MyBroskiTV in 2007, the first video of which has amassed more than 4.5-million views to date.

On a more serious note, many cautionary news articles report young people suffering serious medical conditions after drinking too many Jager bombs, and medical professionals have gone on the record to advise against drinking them.

The phrase jager bomb has also come to be metaphorically used in other contexts to refer to something that’s “definitely not good for you, but gets the job done,” as a film critic once described a Rob Zombie slasher film.

This is not meant to be a formal definition of Jager bomb like most terms we define on Dictionary.com, but is rather an informal word summary that hopefully touches upon the key aspects of the meaning and usage of Jager bomb that will help our users expand their word mastery.