Between 2013–17, Magcon was an event featuring young online stars from platforms like Instagram and the former Vine who toured the US to meet their fans. The name joins the initials of meet and greet with con, short for convention (cf., Comic-Con).

Where does Magcon come from? 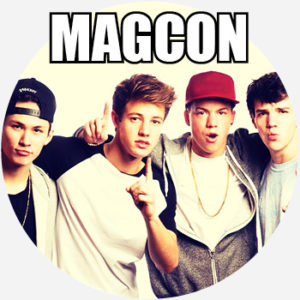 Magcon was first founded in September, 2013 by an entrepreneur named Bart Bordelon. Bordelon got the idea from Aaron Carpenter, an internet personality, who said he was going to the mall to meet up with some of his Instagram followers. Hundreds of teen girls showed up, and this turnout inspired Bordelon to hold the first Magcon in Houston, Texas in November, 2013.

After several successful appearances at the convention, Hayes Grier, Nash Grier, Cameron Dallas, and Carter Reynolds announced that they would be leaving Magcon on April 17, 2014. It caused an upset on social media, with the hashtags “#RIPMagcon” and “#cutformagcon” trending. This event signaled the disbanding of Magcon until, to the surprise of fans, a 2016 Magcon tour took place. Magcon returned again in 2017, but it’s future as of the time of this writing is uncertain.

i miss when all i cared about was magcon vines
@kennedy_balleww, January, 2018
It was a sign I'd come to the right place. Wherever the screams were coming from, that's where Magcon would be.
Dayna Evans, Gawker, May, 2014
Magcon never asked for talent, it simply asked for cute guys. And despite the drama, it looks like fans are ready for their idols to return.
Megan Willett, Business Insider, September, 2015
SEE MORE EXAMPLES

The members of Magcon have a massive following, not unlike boy-band or popstar fandom. In fact, creator Bordelon says that they are the “most famous kids you’ve never heard of!” Those involved in Magcon are considered to be part of the “Magcon Family.”

This is not meant to be a formal definition of Magcon like most terms we define on Dictionary.com, but is rather an informal word summary that hopefully touches upon the key aspects of the meaning and usage of Magcon that will help our users expand their word mastery.