Monchhichi is a brand of Japanese monkey dolls popular in the 1970–80s.

Where does Monchhichi come from? 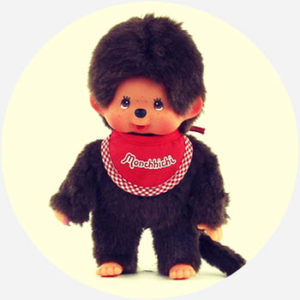 Monchhichi, often misspelled as monchichi, refers to a line of stuffed monkey dolls first created in 1974 by the Sekiguchi Corporation, a Japanese toymaker.

The name Monchhichi is said to be a portmanteau of the French mon, meaning “mine” as well as the English monkey, and chhichi, based on Japanese onomatopoeia for the sound a baby makes when sucking a pacifier. The dolls are indeed designed to suck their thumbs. The toys, sold as both boy and girl monkeys, were quickly a must-have in Japan—and soon after in Europe and around the world. US advertisements for the dolls, sold by Mattel, memorably featured the jingle: “Monchhichis, Monchhichis, oh so soft and cuddly!”

Monchhichi was further popularized by the 1980 Japanese anime series, Futago No Monchhichi, starring the critters. Hanna-Barbera brought the craze to US television with their short-lived cartoon in 1983, Monchhichis, which depicted them living in a treetop world called Monchia.

Despite the sensation, Monchhichi sales slowed in the late 1980s. The product line was revived in 2004 to observe the 30th anniversary of its release. Monchhichi dolls are still widely available for purchase, and vintage dolls are collectible. In 2017, Paris-based studio Technicolor Animation Productions debuted a new CG-animated Monchhichi cartoon for French audiences.

Whatever happened to the Monchhichis ? #DeepThoughtsFromThe80s
@mr_fedup, March, 2018
another reason I should've been an 80s baby: monchhichis are SO CUTE
@wolfsmelk, April, 2018
Not only is mochi tasty and fun to eat, it’s also fun to say! It reminds me of “Monchhichi, Monchhichi, oh so soft and cud-dl-y.”
Foodie Calls, January, 2009
SEE MORE EXAMPLES

While best known as Monchhichi, some children call them Chicaboos in England, Virkiki in Spain, and Mon Cici in Italy. They’re also sometimes called Love Monkeys.

While Monchhichi is the plural form in Japanese, English often uses Monchhichis.

Outside of reference to the toys as produced and sold today, Monchhichis are fondly cited as a part of 1980s nostalgia by adults who grew up playing with them—or by subsequent generations as an example of the strange toys of yesteryear.

This is not meant to be a formal definition of Monchhichi like most terms we define on Dictionary.com, but is rather an informal word summary that hopefully touches upon the key aspects of the meaning and usage of Monchhichi that will help our users expand their word mastery.