What does Monopoly money mean?

Monopoly money refers to the play money used in the board game Monopoly. It can also be used to describe money that shares qualities with play money either in appearance or in perceived lack of value.

Where does Monopoly money come from? 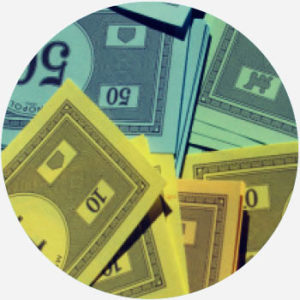 Parker Brothers released the now-classic board game Monopoly in 1935. Charles Darrow, usually credited as the game’s creator, played an early, homemade version of the game in 1932. This, in turn, was based on The Landlord’s Game, patented by its creator Elizabeth Magie in 1904. Both the Parker Brothers game and Magie’s featured physical play money for gameplay.

In Monopoly, the money comes in denominations of $1 (white in color) to $500 (gold or orange). Each player starts with $1500, as distributed and managed by the game’s designated banker. As the game gained popularity, people began to use Monopoly money to describe money that in some way resembled the fake money from the game. That could mean money with real value that looks or feels strange physically, like the multi-colored, thin paper bills from the game. It could also refer to scrip, vouchers, or other tokens that only have value in certain limited circumstances.

The 1949 book Grandparents Go Abroad compared the German Deutsche Mark to Monopoly money in look and feel. During 1958 hearings about payola, a bribery scheme between music publishers and radio stations, a witness before the US House of Representatives claimed that the record company BMI was handing out monopoly money to get air play. The witness invoked the game, suggesting that the money was thrown around “indiscriminately” like play money. The term was used again in a Congressional hearing in 1976, this time to describe the scrip used for the food-stamps welfare program.

In 1998, a New Yorker cartoon, featuring the Monopoly mascot Mr. Moneybags as a bank teller, invoked monopoly money to describe the look and feel of the newly revamped twenty-dollar bill.

Neither country has properly colored money so I wouldn’t be surprised if you accidentally picked up Monopoly money.
@3rdburned, March, 2018
We see various types of forged bills...Some are fairly sophisticated, and some are not. Some you can see why people would be fooled. Others look like Monopoly money.
Joe Messerich, WQAD, March, 2018
A lot of times we exceed goals but our productivity rate is not high enough to get a full bonus which doesn't make sense...We meet and exceed our goals constantly and as a reward we get a "congratulations" or "swag bucks," which is basically Monopoly money that we can use in the Swag Store [which sells Amazon merchandise].
Amazon employee quoted by Shelby Rogers, Interesting Engineering, March, 2018
SEE MORE EXAMPLES

In colloquial speech and writing, counterfeit money is sometimes called monopoly money for rhetorical effect to indicate its worthlessness, and, in the case of poor counterfeits, its obviously fake appearance. The phrase monopoly money has other, unrelated, uses which predate the board game and which are worth noting here.

As early as 1901, monopoly money was used to describe money made and held by actual monopolists. Monopoly money has also been used to refer to currency issued by a government as early as 1915, when Alfred and Maud Westrup contrasted monopoly money with a plan by landowners to issue their own currency. Monopoly money in this sense was a point of contention discussed by the US Congress during hearings for the Banking Act of 1935, which restructured the governance of the Federal Reserve.

Several writers addressed the perceived weaknesses of monopoly money in the 1980s. In 1984, for example, a group called the Choice-in-Currency Commission proposed that gold coins should compete with “the Federal Reserve System’s monopoly money.” Here, monopoly money may have additionally evoked the monopolistic and capitalistic needs to win the board game.

This is not meant to be a formal definition of Monopoly money like most terms we define on Dictionary.com, but is rather an informal word summary that hopefully touches upon the key aspects of the meaning and usage of Monopoly money that will help our users expand their word mastery.