What does parachute pants mean?

Parachute pants refers to a style of nylon pants popular in the 1980s or baggy pants associated with the rapper MC Hammer.

Where does parachute pants come from? 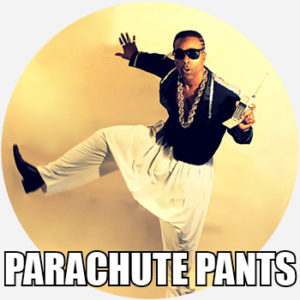 In the 1970s, some high-end fashion designers like Dior and Yves Saint Laurent sold exaggeratedly baggy women’s pants with a low crotch, which some in the fashion press dubbed parachute pants based on their billowy cut. This style, which first became fashionable in the 19th century, is also known as harem pants.

In the early 1980s, a different style of pants became known as parachute pants. These were close-fitting, unlike harem pants and made of nylon or polyester. They were named for the material’s resemblance to that used in parachutes. The use of nylon was inspired by breakdancers who used the material’s slickness to help achieve their spinning dance moves. Major press outlets like Forbes and The New Yorker both noted this new fashion trend in 1984.

The 1990s saw yet another iteration of parachute pants, when rapper MC Hammer became known for his baggy harem pants in addition to his rhyming and dancing skills. His harem pants were sometimes called parachute pants by fans and media alike, such as the music magazine Vibe. A 1991 Taco Bell commercial seemed to play on the name parachute pants by showing MC Hammer jumping off a rooftop, his descent slowed by his ballooning pants.

In the 2000-10s, performers like Justin Bieber and Kendrick Lamar wore parachute pants in the harem style. In 2013, Elite Daily claimed that parachute pants were back in style.

Hate when my jeans fit perfectly then feel like parachute pants 10 minutes later🙄
@Sydneydenise14, February, 2018
My friends and I weren't just at the mall to buy parachute pants or lip gloss, but to participate in copycat consumer rituals that anchored us in the tribe of our peers.
Anna Hanks, The Dallas Morning News, February, 2018
Return with us now to those totally tubular days of yesteryear, specifically the early 1980s. It was a time before many Weekly Volcano readers were born, a time of Reagan-era nuclear fears, indefensible parachute pants and the dazzling high-tech wizardry of the Atari 2600.
Christian Carvajal, Weekly Volcano, February, 2018
SEE MORE EXAMPLES

Because the street-styled parachute pants were a short-lived trend, they are often invoked to reminisce about 1980s popular culture.

Parachute pants are often taken for and called harem pants, which are themselves frequently called Hammer pants, being the superstar rapper’s signature in the 1990s. MC Hammer has said he “detest[s]” the term parachute pants and prefers Hammer pants.

The term parachute pants, while in and out of vogue, can carry a derisive and nostalgic tone, in part mocking and in part missing the short-lived fashion trends of the past decades.

This is not meant to be a formal definition of parachute pants like most terms we define on Dictionary.com, but is rather an informal word summary that hopefully touches upon the key aspects of the meaning and usage of parachute pants that will help our users expand their word mastery.